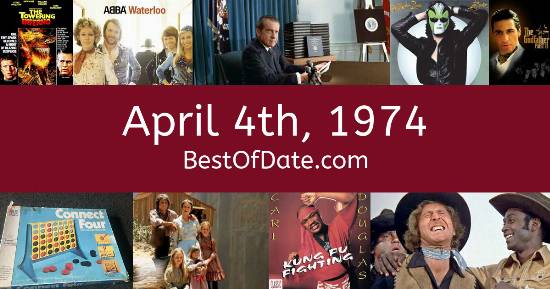 Songs that were on top of the music singles charts in the USA and the United Kingdom on April 4th, 1974.

The date is April 4th, 1974 and it's a Thursday. Anyone born today will have the star sign Aries. The summer of 1974 is drawing closer and temperatures have started to rise.

In America, the song Hooked On A Feeling by Blue Swede is on top of the singles charts. Over in the UK, Seasons In The Sun by Terry Jacks is the number one hit song. Richard Nixon is currently the President of the United States and the movie The Sting is at the top of the Box Office.

On TV, people are watching popular shows such as "Gunsmoke", "The Odd Couple", "Last of the Summer Wine" and "Good Times". Meanwhile, gamers are playing titles such as "Pong", "Space Race" and "Gotcha". Children and teenagers are currently watching television shows such as "The Bugs Bunny Show", "JOT the Dot", "All in the Family" and "The Adventures of Black Beauty".

Popular toys at the moment include the likes of Lite-Brite, Battleship (game), Big Jim (action figure) and Shrinky Dinks.

If you are looking for some childhood nostalgia, then check out April 4th, 1980 instead.

Actor. Deceased
Born on April 4th, 1979
He was born exactly 5 years after this date.

German soccer player.
Born on April 4th, 1987
She was born exactly 13 years after this date.

Richard Nixon was the President of the United States on April 4th, 1974.

Harold Wilson was the Prime Minister of the United Kingdom on April 4th, 1974.

Enter your date of birth below to find out how old you were on April 4th, 1974.

Here are some fun statistics about April 4th, 1974.