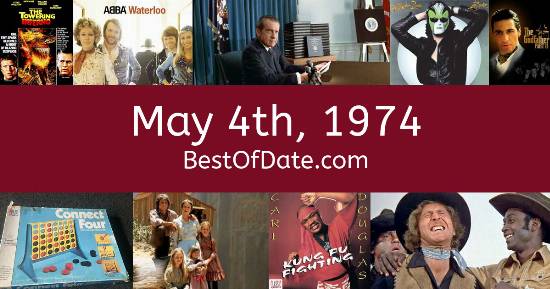 Songs that were on top of the music singles charts in the USA and the United Kingdom on May 4th, 1974.

The date is May 4th, 1974 and it's a Saturday. Anyone born today will have the star sign Taurus. Currently, people are enjoying their weekend.

The summer of 1974 has finally arrived. The weather has warmed up and the evenings are brighter than usual. In America, the song The Locomotion by Grand Funk Railroad is on top of the singles charts. Over in the UK, Waterloo by ABBA is the number one hit song.

On TV, people are watching popular shows such as "McMillan & Wife", "Emergency!", "M*A*S*H" and "Good Times". Meanwhile, gamers are playing titles such as "Pong", "Space Race" and "Gotcha". Kids and teenagers are watching TV shows such as "JOT the Dot", "Mister Rogers' Neighborhood", "Sesame Street" and "Happy Days".

Popular toys at the moment include the likes of Etch A Sketch, Clackers, Crissy (doll) and Kenner SSP Racers.

Notable events that occurred around May 4th, 1974.

Richard Nixon was the President of the United States on May 4th, 1974.

Harold Wilson was the Prime Minister of the United Kingdom on May 4th, 1974.

Enter your date of birth below to find out how old you were on May 4th, 1974.

Leave a comment and tell everyone why May 4th, 1974 is important to you.