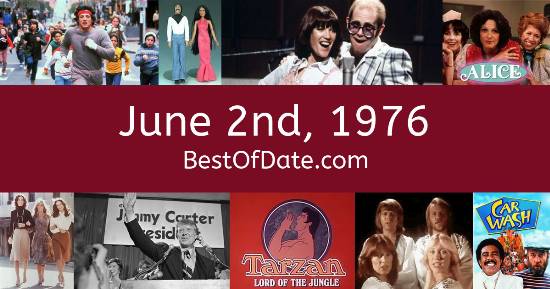 Songs that were on top of the music singles charts in the USA and the United Kingdom on June 2nd, 1976.

The date is June 2nd, 1976 and it's a Wednesday. Anyone born today will have the star sign Gemini. It's summer, so the temperatures are warmer and the evenings are longer than usual.

In America, the song Love Hangover by Diana Ross is on top of the singles charts. Over in the UK, No Charge by J.J. Barrie is the number one hit song. Gerald Ford is currently the President of the United States and the movie The Missouri Breaks is at the top of the Box Office.

On TV, people are watching popular shows such as "The Mary Tyler Moore Show", "McMillan & Wife", "Emergency!" and "M*A*S*H". Meanwhile, gamers are playing titles such as "Tank", "Pursuit", "Gun Fight" and "Breakout". Children and teenagers are currently watching television shows such as "Captain Kangaroo", "Mister Rogers' Neighborhood", "Sesame Street" and "Fat Albert and the Cosby Kids".

If you're a kid or a teenager, then you're probably playing with toys such as Etch A Sketch, the Easy-Bake Oven, Dungeons & Dragons and Micronauts.

If you are looking for some childhood nostalgia, then check out June 2nd, 1982 instead.

Youtube personality. Deceased
Born on June 2nd, 1984
She was born exactly 8 years after this date.

Argentine soccer player.
Born on June 2nd, 1988
He was born exactly 12 years after this date.

Canadian streamer.
Born on June 2nd, 1994
He was born exactly 18 years after this date.

Gerald Ford was the President of the United States on June 2nd, 1976.

James Callaghan was the Prime Minister of the United Kingdom on June 2nd, 1976.

Enter your date of birth below to find out how old you were on June 2nd, 1976.

Here are some fun statistics about June 2nd, 1976.