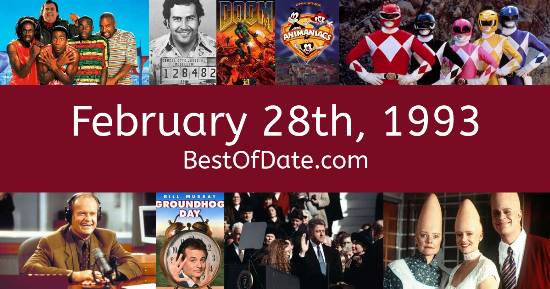 On February 28th, 1993, the following songs were at the top of the music charts in the USA and the UK.

The date is February 28th, 1993, and it's a Sunday. Anyone born today will have the star sign Pisces. Currently, people are enjoying their weekend.

In Waco, Texas, a law enforcement siege has just begun. The siege started after a gunfight erupted when ATF agents attempted to serve a search warrant on a compound belonging the religious sect the Branch Davidians. Four government agents have been left dead following the incident and the FBI has since taken command of the operation. If you were to travel back to this day, notable figures such as Brandon Lee, Conway Twitty, Dražen Petrović and Pat Nixon would all be still alive. On TV, people are watching popular shows such as "In the Heat of the Night", "Family Matters", "One Foot in the Grave" and "Home Improvement".

Meanwhile, gamers are playing titles such as "Duck Hunt", "Paperboy", "Sonic the Hedgehog 2" and "Tecmo NBA Basketball". Kids and teenagers are watching TV shows such as "Thomas the Tank Engine", "Doug", "Barney & Friends" and "The Animals of Farthing Wood". Popular toys at the moment include the likes of the Ghostbusters Proton Pack, Lego Pirates, Mighty Max and the Talkboy.

These are trending news stories and fads that were prevalent at this time. These are topics that would have been in the media on February 28th, 1993.

Check out our personality summary for people who were born on February 28th, 1993.

If you are looking for some childhood nostalgia, then you should check out February 28th, 1999 instead.

Bill Clinton was the President of the United States on February 28th, 1993.

John Major was the Prime Minister of the United Kingdom on February 28th, 1993.

Enter your date of birth below to find out how old you were on February 28th, 1993.
This information is not transmitted to our server.

Here are some fun statistics about February 28th, 1993.