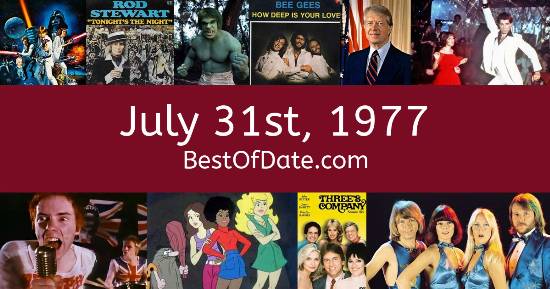 Songs that were on top of the music singles charts in the USA and the United Kingdom on July 31st, 1977.

The date is July 31st, 1977 and it's a Sunday. Anyone born today will have the star sign Leo. Currently, people are enjoying their weekend.

It's summer, so the temperatures are warmer and the evenings are longer than usual. In America, the song Looks Like We Made It by Barry Manilow is on top of the singles charts. Over in the UK, I Feel Love by Donna Summer is the number one hit song.

On TV, people are watching popular shows such as "Last of the Summer Wine", "The Rockford Files", "Baretta" and "Three's Company". Meanwhile, gamers are playing titles such as "Tank", "Pursuit", "Gun Fight" and "Breakout". Kids and teenagers are watching TV shows such as "The Bugs Bunny Show", "All in the Family", "Fat Albert and the Cosby Kids" and "Happy Days".

If you're a kid or a teenager, then you're probably playing with toys such as Etch A Sketch, Magnavox Odyssey, Stretch Armstrong and Star Wars action figures.

Celebrities, historical figures and notable people who were born on the 31st of July.

Jimmy Carter was the President of the United States on July 31st, 1977.

James Callaghan was the Prime Minister of the United Kingdom on July 31st, 1977.

Leave a comment and tell everyone why July 31st, 1977 is important to you.