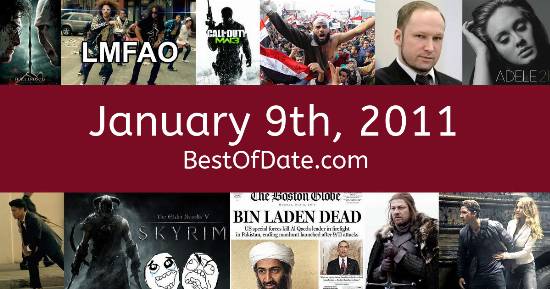 Songs that were on top of the music singles charts in the USA and the United Kingdom on January 9th, 2011.

The date is January 9th, 2011 and it's a Sunday. Anyone born today will have the star sign Capricorn. Currently, people are enjoying their weekend.

The Christmas holiday season is long over, the decorations have been taken down and a sense of normality has returned. In America, the song Firework by Katy Perry is on top of the singles charts. Over in the UK, When We Collide by Matt Cardle is the number one hit song.

Barack Obama is currently the President of the United States and the movie True Grit is at the top of the Box Office. In the United Kingdom, David Cameron is the current Prime Minister. The term "hipster" is currently growing in use. The word is being used to describe people who are pretentious and deliberately anti-mainstream.

A Youtube video of a homeless man called Ted Williams is going viral after he shows off his radio voice skills. The success of the video has led to Williams receiving various job offers. A meme called "Inglip" is currently popular on websites such as Reddit, as users post commands that they received via the words shown in CAPTCHA images. In soccer, Kenny Dalglish has returned as the manager of Liverpool following the sacking of Roy Hodgson.

America is in shock following an assassination attempt on House Representative Gabby Giffords in Casas Adobes, Arizona. A 22-year-old man called Jared Lee Loughner was arrested at the scene. On TV, people are watching popular shows such as "Dora the Explorer", "House", "Sons of Anarchy" and "Glee". Meanwhile, gamers are playing titles such as "Heavy Rain", "Battlefield: Bad Company 2", "Red Dead Redemption" and "Halo: Reach".

Kids and teenagers are watching TV shows such as "Peppa Pig", "LazyTown", "Curious George" and "Big Time Rush". If you're a kid or a teenager, then you're probably playing with toys such as the PlayStation 3, the KidiZoom Camera, ZhuZhu Pets and the iPad.

If you are looking for some childhood nostalgia, then check out January 9th, 2017 instead.

Barack Obama was the President of the United States on January 9th, 2011.

David Cameron was the Prime Minister of the United Kingdom on January 9th, 2011.

Enter your date of birth below to find out how old you were on January 9th, 2011.

Here are some fun statistics about January 9th, 2011.