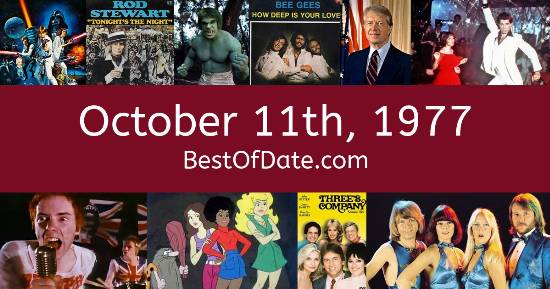 Songs that were on top of the music singles charts in the USA and the United Kingdom on October 11th, 1977.

The date is October 11th, 1977 and it's a Tuesday. Anyone born today will have the star sign Libra. The summer is long gone. Temperatures have started to become much cooler and the evenings are beginning to get darker.

Fallen leaves have carpeted driveways, lawns, pathways and sidewalks and there's a fresh earthy scent in the ear. In America, the song Star Wars Theme by Meco is on top of the singles charts. Over in the UK, Silver Lady by David Soul is the number one hit song.

On TV, people are watching popular shows such as "Columbo.", "Baretta", "Starsky & Hutch" and "The Love Boat". Meanwhile, gamers are playing titles such as "Tank", "Pursuit", "Gun Fight" and "Breakout". Kids and teenagers are watching TV shows such as "Captain Kangaroo", "The Bugs Bunny Show", "Mister Rogers' Neighborhood" and "Sesame Street".

If you're a kid or a teenager, then you're probably playing with toys such as VertiBird (toy helicopter), Baby Alive (doll), Dungeons & Dragons and Mattel Electronic Football (handheld game).

Celebrities, historical figures and notable people who were born on the 11th of October.

Jimmy Carter was the President of the United States on October 11th, 1977.

James Callaghan was the Prime Minister of the United Kingdom on October 11th, 1977.

Enter your date of birth below to find out how old you were on October 11th, 1977.

Here are some fun statistics about October 11th, 1977.

Leave a comment and tell everyone why October 11th, 1977 is important to you.