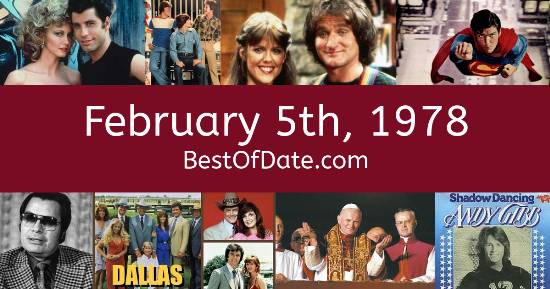 Songs that were on top of the music singles charts in the USA and the United Kingdom on February 5th, 1978.

The movie "Close Encounters of the Third Kind" was at the top of the box office on February 5th, 1978.

The date is February 5th, 1978 and it's a Sunday. Anyone born today will have the star sign Aquarius. Currently, people are enjoying their weekend.

In America, the song Stayin' Alive by The Bee Gees is on top of the singles charts. Over in the UK, Uptown Top Ranking by Althea & Donna is the number one hit song. Jimmy Carter is currently the President of the United States and the movie Close Encounters of the Third Kind is at the top of the Box Office.

If you were to travel back to this day, notable figures such as Keith Moon, Sid Vicious and John Wayne would all be still alive. On TV, people are watching popular shows such as "Hawaii Five-O", "Starsky & Hutch", "Fawlty Towers" and "The Love Boat". Meanwhile, gamers are playing titles such as "Pursuit", "Gun Fight" and "Breakout".

Children and teenagers are currently watching television shows such as "Mister Rogers' Neighborhood", "Fat Albert and the Cosby Kids", "Bagpuss" and "Fred Flintstone and Friends". Popular toys at the moment include the likes of Twister mat, Connect Four, Mattel Electronic Football (handheld game) and the Atari 2600.

If you are looking for some childhood nostalgia, then check out February 5th, 1984 instead.

Soccer player.
Born on February 5th, 1984
He was born exactly 6 years after this date.

Soccer player.
Born on February 5th, 1985
He was born exactly 7 years after this date.

Soccer player.
Born on February 5th, 1992
He was born exactly 14 years after this date.

Jimmy Carter was the President of the United States on February 5th, 1978.

James Callaghan was the Prime Minister of the United Kingdom on February 5th, 1978.

Have something to say about February 5th, 1978?

Enter your date of birth below to find out how old you were on February 5th, 1978.

Here are some fun statistics about February 5th, 1978.