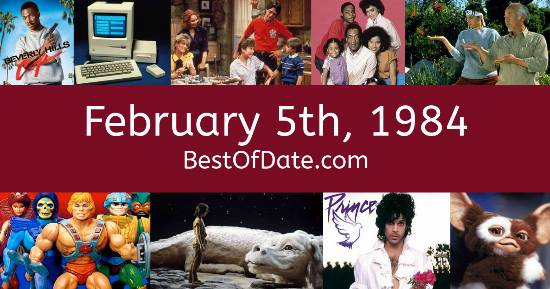 Songs that were on top of the music singles charts in the USA and the United Kingdom on February 5th, 1984.

The movie "Terms of Endearment" was at the top of the Box Office on February 5th, 1984.

The date is February 5th, 1984, and it's a Sunday. Anyone born today will have the star sign Aquarius. Currently, people are enjoying their weekend.

In America, the song Karma Chameleon by Culture Club is on top of the singles charts. Over in the UK, Relax by Frankie goes to Hollywood is the number one hit song. Ronald Reagan is currently the President of the United States, and the movie Terms of Endearment is at the top of the Box Office.

If you were to travel back to this day, notable figures such as Marvin Gaye, Truman Capote, Kiki Camarena and David Huffman would all be still alive. On TV, people are watching popular shows such as "The Two Ronnies", "Last of the Summer Wine", "Only Fools and Horses" and "Cheers". Meanwhile, gamers are playing titles such as "Space Invaders", "Asteroids", "Donkey Kong" and "Mario Bros.".

Children and teenagers are currently watching television shows such as "Captain Kangaroo", "Happy Days", "Danger Mouse" and "He-Man and the Masters of the Universe". Popular toys at the moment include the likes of Big Jim (action figure), Snoopy Sno-Cone Machine, My Little Pony (figures) and Turnin' Turbo Dashboard.

These are trending news stories and fads that were prevalent at this time. These are topics that would have been in the media on February 5th, 1984.

News stories, pop culture trends, and other events that happened around February 5th, 1984.

Check out our personality summary for people who were born on February 5th, 1984.

Television shows that people were watching in February, 1984.

Popular video games that people were playing in February of 1984.

If you are looking for some childhood nostalgia, then you should check out February 5th, 1990, instead.

Celebrities, historical figures, and other notable people who were born on February 5th.

Soccer player.
Born on February 5th, 1985
He was born exactly one year after this date.

Soccer player.
Born on February 5th, 1992
He was born exactly 8 years after this date.

Shooting victim. Deceased
Born on February 5th, 1995
He was born exactly 11 years after this date.

Ronald Reagan was the President of the United States on February 5th, 1984.

Find out what your age was on February 5th, 1984, by entering your DOB below.
This information is not saved on our server.

Here are some fun statistics about February 5th, 1984.