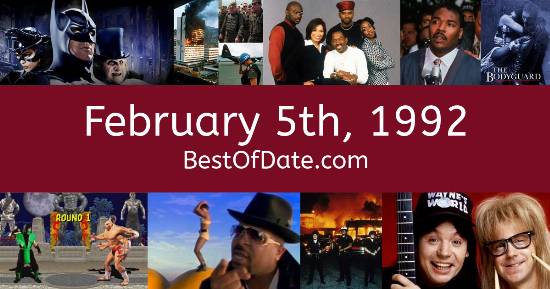 Songs that were on top of the music singles charts in the USA and the United Kingdom on February 5th, 1992.

The movie "The Hand That Rocks the Cradle" was at the top of the Box Office on February 5th, 1992.

The date is February 5th, 1992, and it's a Wednesday. Anyone born today will have the star sign Aquarius. In America, the song I'm Too Sexy by Right Said Fred is on top of the singles charts.

Over in the UK, Goodnight Girl by Wet Wet Wet is the number one hit song. George W. Bush Snr. is currently the President of the United States, and the movie The Hand That Rocks the Cradle is at the top of the Box Office. In the United Kingdom, John Major is the current Prime Minister.

It's 1992, so radio stations are being dominated by the likes of Kris Kross, Boyz II Men, Whitney Houston, Sir Mix-a-Lot, Right Said Fred, Snap! and Nirvana. Department chain Macy's has just filed for Chapter 11 bankruptcy protection amid mounting losses and an estimated debt of around $5.3 billion. In Ireland, Charles Haughey has resigned as leader of Fianna Fail. His resignation comes on the back of recent revelations that he authorized the phone-tapping of two journalists back in 1982.

Following the recent breakup of the Soviet Union, Russian president Boris Yeltsin and US president George H. W. Bush have announced that they will both stop aiming nuclear weapons at one another. Furthermore, the pair have met at Camp David and formally declared that the Cold War is officially over. The trial of four police officers for the beating of Rodney King back in March of 1991 has recently started in Simi Valley, California. In Venezuela, Major Hugo Chávez has just been arrested after leading a failed coup attempt against President Carlos Andrés Pérez.

In soccer, Kevin Keegan has just become the new manager of English side Newcastle United. In Milwaukee, the trial of suspected serial killer Jeffrey Dahmer is still ongoing. Dahmer has been charged with four counts of first-degree murder. If you were to travel back to this day, notable figures such as Robert Reed, Anthony Perkins, Audrey Hepburn and Thurgood Marshall would all be still alive.

On TV, people are watching popular shows such as "Sherlock Holmes", "Murder, She Wrote", "The Golden Girls" and "Quantum Leap". Meanwhile, gamers are playing titles such as "Duck Hunt", "Paperboy", "F-16 Combat Pilot" and "Teenage Mutant Ninja Turtles III: The Manhattan Project". Kids and teenagers are watching TV shows such as "Pingu", "Married... with Children", "The Simpsons" and "Taz-Mania".

Popular toys at the moment include the likes of the Easy-Bake Oven, the Sega Genesis / Mega Drive, the SEGA Game Gear and Super Soaker (water gun).

These are trending news stories and fads that were prevalent at this time. These are topics that would have been in the media on February 5th, 1992.

News stories and other events that happened around February 5th, 1992.

Check out our personality summary for people who were born on February 5th, 1992.

Television shows that people were watching in February, 1992.

Popular video games that people were playing in February of 1992.

If you are looking for some childhood nostalgia, then you should check out February 5th, 1998 instead.

George W. Bush Snr. was the President of the United States on February 5th, 1992.

John Major was the Prime Minister of the United Kingdom on February 5th, 1992.

Find out what your age was on February 5th, 1992, by entering your DOB below.
This information is not saved on our server.

Here are some fun statistics about February 5th, 1992.