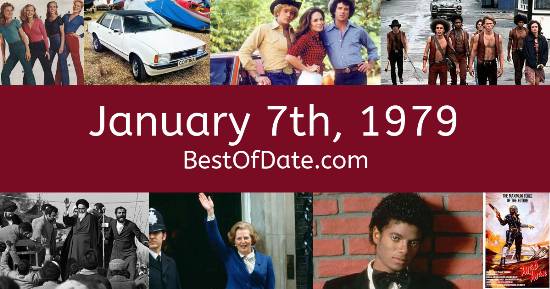 Songs that were on top of the music singles charts in the USA and the United Kingdom on January 7th, 1979.

The date is January 7th, 1979 and it's a Sunday. Anyone born today will have the star sign Capricorn. Currently, people are enjoying their weekend.

People are starting to return back to work and school after the Christmas holidays. In America, the song Too Much Heaven by The Bee Gees is on top of the singles charts. Over in the UK, YMCA by Village People is the number one hit song.

On TV, people are watching popular shows such as "All in the Family", "Wonder Woman", "The Muppet Show" and "Mork & Mindy". Meanwhile, gamers are playing titles such as "Pursuit", "Gun Fight", "Breakout" and "Space Invaders". Kids and teenagers are watching TV shows such as "Mister Rogers' Neighborhood", "Sesame Street", "Fat Albert and the Cosby Kids" and "Battle of the Planets".

Popular toys at the moment include the likes of Etch A Sketch, Big Jim (action figure), Dungeons & Dragons and Water Ring Toss.

Jimmy Carter was the President of the United States on January 7th, 1979.

James Callaghan was the Prime Minister of the United Kingdom on January 7th, 1979.

Enter your date of birth below to find out how old you were on January 7th, 1979.

Here are some fun statistics about January 7th, 1979.

Leave a comment and tell everyone why January 7th, 1979 is important to you.