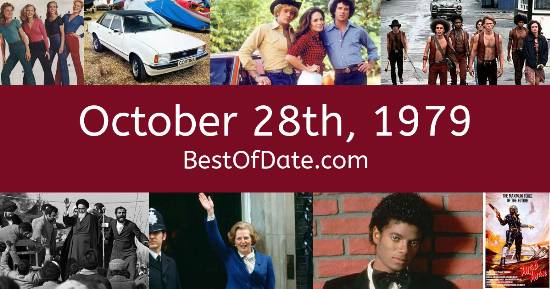 Songs that were on top of the music singles charts in the USA and the United Kingdom on October 28th, 1979:

The date is October 28th, 1979 and it's a Sunday. Anyone born today will have the star sign Scorpio. Currently, people are enjoying their weekend.

The summer is long gone. Temperatures have started to become much cooler and the evenings are beginning to get darker. Fallen leaves have carpeted driveways, lawns, pathways and sidewalks and there's a fresh earthy scent in the ear. Halloween of 1979 is just days away. People are watching horror movies and thinking about which costume they are going to wear. Others are organizing parties.

In America, the song Rise by Herb Alpert is on top of the singles charts. Over in the UK, One Day At A Time by Lena Martell is the number one hit song. Jimmy Carter is currently the President of the United States and Margaret Thatcher is the Prime Minister of the United Kingdom.

In fashion, clothes have become baggier and pants have become less flared. Sports clothing and the "disco look" are both popular at the moment. Women are wearing sundresses, strapless tops with t-shirts, shoulder pads, cardigans, knee-length skirts and daisy dukes. Meanwhile, men are wearing tracksuits, flare jeans, low-top sneakers and untucked collared shirts. Because it's 1979, the music charts are being dominated by the likes of Blondie, Gloria Gaynor, M, Donna Summer, Patrick Hernandez, The Knack and Rod Stewart. On TV, people are watching popular shows such as "Eight Is Enough", "The Dukes of Hazzard", "Archie Bunker's Place" and "Trapper John, M.D.".

Meanwhile, gamers are playing titles such as "Gun Fight", "Breakout", "Space Invaders" and "Lunar Lander". Kids and teenagers are watching TV shows such as "Captain Kangaroo", "The Bugs Bunny Show", "Mork & Mindy" and "Diff'rent Strokes". If you're a kid or a teenager, then you're probably playing with toys such as "Magna Doodle", "Dungeons & Dragons", "Micronauts" and "Snoopy Sno-Cone Machine".

Who was the Prime Minister of the United Kingdom on October 28th, 1979?

Enter your date of birth below to find out how old you were on October 28th, 1979.

Looking for some nostalgia? Here are some Youtube videos relating to October 28th, 1979. Please note that videos are automatically selected by Youtube and that results may vary! Click on the "Load Next Video" button to view the next video in the search playlist. In many cases, you'll find episodes of old TV shows, documentaries, music videos and soap dramas.

Here are some fun statistics about October 28th, 1979.