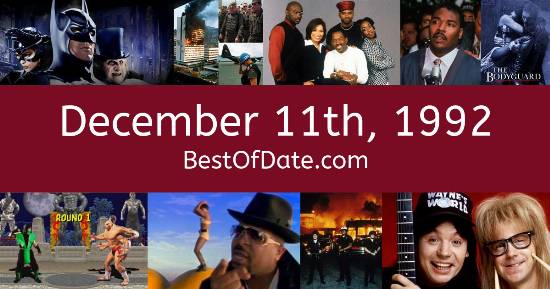 Songs that were on top of the music singles charts in the USA and the United Kingdom on December 11th, 1992.

The date is December 11th, 1992 and it's a Friday. Anyone born today will have the star sign Sagittarius. Currently, people have "that Friday feeling" and are looking forward to the weekend.

The Christmas season of 1992 is in full swing. People are putting up their decorations and festive songs are playing on the radio. The song I Will Always Love You by Whitney Houston is on top of the singles charts in both the USA and the United Kingdom. George W. Bush Snr. is currently the President of the United States and the movie Home Alone 2: Lost in New York is at the top of the Box Office.

US military forces have arrived in Somalia to help guarantee the delivery of humanitarian aid. Over the past few months, the situation in the country has continued to worsen, with factions continuing to splinter into smaller groups. This has made it extremely difficult for the UN to negotiate with faction leaders over food distribution. It has been officially announced that Prince Charles and Lady Diana have separated. The news has not come as a shock, as it is public knowledge that their relationship had fallen apart and that they were both seeing other people. The legal drama film "A Few Good Men", starring Tom Cruise and Jack Nicholson, has just been released in movie theaters. Meanwhile, "The Muppet Christmas Carol" has also hit the big screen.

If you were to travel back to this day, notable figures such as Audrey Hepburn, Thurgood Marshall, Andre the Giant and Bobby Moore would all be still alive. On TV, people are watching popular shows such as "Cheers", "Matlock", "Roseanne" and "Melrose Place". Meanwhile, gamers are playing titles such as "Wolfenstein 3D", "Ecco the Dolphin", "Mortal Kombat" and "Super Star Wars".

If you are looking for some childhood nostalgia, then check out December 11th, 1998 instead.

George W. Bush Snr. was the President of the United States on December 11th, 1992.

John Major was the Prime Minister of the United Kingdom on December 11th, 1992.

Enter your date of birth below to find out how old you were on December 11th, 1992.

Here are some fun statistics about December 11th, 1992.