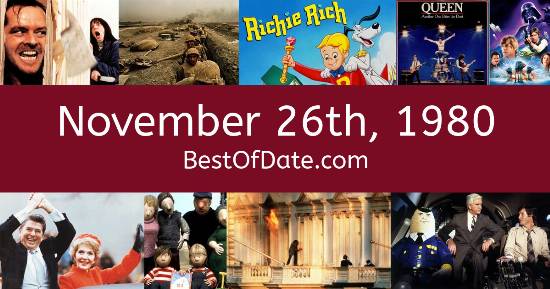 Songs that were on top of the music singles charts in the USA and the United Kingdom on November 26th, 1980.

The date is November 26th, 1980 and it's a Wednesday. Anyone born today will have the star sign Sagittarius. In America, it is the day before Thanksgiven Day and people are looking forward to tomorrow's dinner.

It's November, so the evenings are getting darker and the days are getting colder. In America, the song Lady by Kenny Rogers is on top of the singles charts. Over in the UK, Super Trouper by ABBA is the number one hit song.

On TV, people are watching popular shows such as "Three's Company", "Taxi", "Archie Bunker's Place" and "Knots Landing". Meanwhile, gamers are playing titles such as "Breakout", "Space Invaders", "Galaxian" and "Pac-Man". Kids and teenagers are watching TV shows such as "Sesame Street", "Happy Days", "The Muppet Show" and "Thundarr the Barbarian".

If you're a kid or a teenager, then you're probably playing with toys such as Dungeons & Dragons, Cabbage Patch Kids, Intellivision (games console) and Monchhichi / Chicaboo.

If you are looking for some childhood nostalgia, then check out November 26th, 1986 instead.

Celebrities, historical figures and notable people who were born on the 26th of November.

Jimmy Carter was the President of the United States on November 26th, 1980.

Margaret Thatcher was the Prime Minister of the United Kingdom on November 26th, 1980.

Enter your date of birth below to find out how old you were on November 26th, 1980.

Here are some fun statistics about November 26th, 1980.