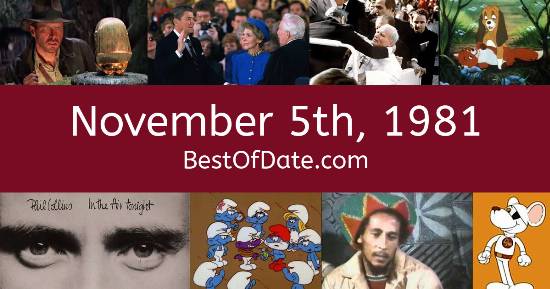 Songs that were on top of the music singles charts in the USA and the United Kingdom on November 5th, 1981:

The date is November 5th, 1981 and it's a Thursday. Anyone born today will have the star sign Scorpio. It's November, so the evenings are getting darker and the days are getting colder.

In America, the song Private Eyes by Hall & Oates is on top of the singles charts. Over in the UK, It's My Party by Dave Stewart & Barbara Gaskin is the number one hit song. Ronald Reagan is currently the President of the United States and Margaret Thatcher is the Prime Minister of the United Kingdom.

In fashion, women are currently wearing jelly shoes, turtleneck sweaters, loose high-waist pants, crop tops and puffer jackets lined with fur. Meanwhile, men have been ditching the disco look of the 70s in favor of athletic clothing such as tracksuits and sports jerseys. The "preppy" look has also been making a comeback. Because it's 1981, the radio stations are being dominated by artists such as Kim Carnes, Soft Cell, Phil Collins, John Lennon, Stars On 45, Diana Ross and Olivia Newton-John. On TV, people are watching popular shows such as "Quincy, M.E.", "The Love Boat", "Hart to Hart" and "Only Fools and Horses".

Meanwhile, gamers are playing titles such as "Breakout", "Lunar Lander", "Missile Command" and "Donkey Kong". Kids and teenagers are watching TV shows such as "The Bugs Bunny Show", "Sesame Street", "Mork & Mindy" and "Diff'rent Strokes". If you're a kid or a teenager, then you're probably playing with toys such as "Lite-Brite", "Atari 2600", "Speak & Spell" and "Fisher-Price Little People (Farm)".

Celebrities, historical figures and noteable people who were born on the 5th of November:

Who was the Prime Minister of the United Kingdom on November 5th, 1981?

Enter your date of birth below to find out how old you were on November 5th, 1981.

Looking for some nostalgia? Here are some Youtube videos relating to November 5th, 1981. Please note that videos are automatically selected by Youtube and that results may vary! Click on the "Load Next Video" button to view the next video in the search playlist. In many cases, you'll find episodes of old TV shows, documentaries, music videos and soap dramas.

Here are some fun statistics about November 5th, 1981.