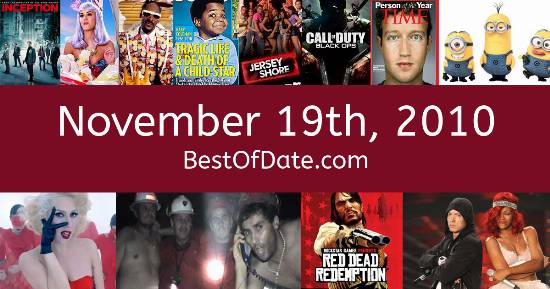 Songs that were on top of the music singles charts in the USA and the United Kingdom on November 19th, 2010.

The date is November 19th, 2010 and it's a Friday. Anyone born today will have the star sign Scorpio. Currently, people have "that Friday feeling" and are looking forward to the weekend.

It's November, so the evenings are getting darker and the days are getting colder. In America, the song We R Who We R by Kesha is on top of the singles charts. Over in the UK, Only Girl by Rihanna is the number one hit song.

Barack Obama is currently the President of the United States and the movie Megamind is at the top of the Box Office. In the United Kingdom, David Cameron is the current Prime Minister. The term "hipster" is currently growing in use. The word is being used to describe people who are pretentious and deliberately anti-mainstream.

It has been announced that Prince William and Catherine Middleton are now engaged. Meanwhile, the media is reporting that the separation of actress Eva Longoria and NBA star Tony Parker occurred because Longoria found hundreds of text messages between Parker and the wife of one of his former teammates. In New Zealand, 29 people have tragically lost their lives in a coal mining accident at the Pike River Mine near Greymouth. The accident is believed to have been caused by a methane explosion.

If you were to travel back to this day, notable figures such as Pete Postlethwaite, Nate Dogg, Elizabeth Taylor and Randy Savage would all be still alive. On TV, people are watching popular shows such as "Dora the Explorer", "Desperate Housewives", "The Office" and "Modern Family". Meanwhile, gamers are playing titles such as "Farmville", "God of War III", "StarCraft II: Wings of Liberty" and "Halo: Reach".

Children and teenagers are currently watching television shows such as "Dora the Explorer", "LazyTown", "Ben 10" and "The Suite Life on Deck". If you're a kid or a teenager, then you're probably playing with toys such as the Xbox 360, the PlayStation 3, the KidiZoom Camera and the iPad.

If you are looking for some childhood nostalgia, then check out November 19th, 2016 instead.

Barack Obama was the President of the United States on November 19th, 2010.

David Cameron was the Prime Minister of the United Kingdom on November 19th, 2010.

Enter your date of birth below to find out how old you were on November 19th, 2010.

Here are some fun statistics about November 19th, 2010.