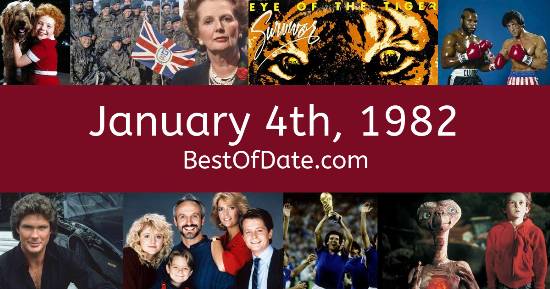 Songs that were on top of the music singles charts in the USA and the United Kingdom on January 4th, 1982.

The date is January 4th, 1982 and it's a Monday. Anyone born today will have the star sign Capricorn. People are starting to return back to work and school after the Christmas holidays.

In America, the song Physical by Olivia Newton-John is on top of the singles charts. Over in the UK, Don't You Want Me by Human League is the number one hit song. Ronald Reagan is currently the President of the United States and the movie Neighbors is at the top of the Box Office.

If you were to travel back to this day, notable figures such as John Belushi, Ayn Rand, Karen Carpenter and Jobriath would all be still alive. On TV, people are watching popular shows such as "The Two Ronnies", "Little House on the Prairie", "Laverne & Shirley" and "Spider-Man and His Amazing Friends". Meanwhile, gamers are playing titles such as "Space Invaders", "Lunar Lander", "Missile Command" and "Donkey Kong".

Kids and teenagers are watching TV shows such as "Captain Kangaroo", "Schoolhouse Rock!", "Happy Days" and "Dogtanian and the Three Muskehounds". Popular toys at the moment include the likes of Cabbage Patch Kids, Screwball Scramble, Snoopy Sno-Cone Machine and the Lego train set.

If you are looking for some childhood nostalgia, then check out January 4th, 1988 instead.

Soccer player.
Born on January 4th, 1990
He was born exactly 8 years after this date.

Ronald Reagan was the President of the United States on January 4th, 1982.

Margaret Thatcher was the Prime Minister of the United Kingdom on January 4th, 1982.

Enter your date of birth below to find out how old you were on January 4th, 1982.

Here are some fun statistics about January 4th, 1982.