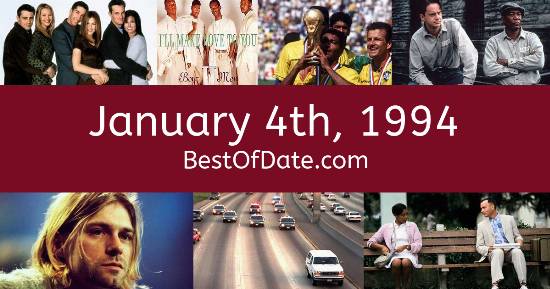 Songs that were on top of the music singles charts in the USA and the United Kingdom on January 4th, 1994.

The date is January 4th, 1994, and it's a Tuesday. Anyone born today will have the star sign Capricorn. People are starting to return back to work and school after the Christmas holidays.

In America, the song Hero by Mariah Carey is on top of the singles charts. Over in the UK, Mr. Blobby by Mr. Blobby is the number one hit song. Bill Clinton is currently the President of the United States, and the movie Mrs. Doubtfire is at the top of the Box Office.

In the United Kingdom, John Major is the current Prime Minister. In Europe, a war is continuing to rage on in Bosnia and Herzegovina. Meanwhile, in technology news, a relatively new storage format called the CD is beginning to outpace the regular cassette tape in music sales. The disc-based format gives listeners the ability to skip between songs instead of having to manually rewind and forward.

In soccer news, Italian striker Roberto Baggio has won the 1993 Ballon d'Or, having beat out contenders such as Dennis Bergkamp and Eric Cantona. A new form of communication called "text messaging" is continuing to grow in popularity. However, it can only be done if both the sender and the receiver are on the same cell network. Meanwhile, a global system called "the Internet" is also starting to take off. Each day, more and more people are learning how to send emails and browse "websites" on the World Wide Web by connecting their IBM computers to noisy dial-up modems.

In fashion, "grunge" clothing has declined in popularity and women are beginning to wear form-fitting outfits such as slip dresses and pencil skirts. Movies such as Clueless and The Craft have popularized the "sexy school girl" look. Tributes are currently pouring in for American actor Cesar Romero, who recently passed away at the age of 86. It's 1994, so radio stations are being dominated by the likes of All-4-One, Boyz II Men, R. Kelly, Céline Dion, Bruce Springsteen, Bryan Adams, Meat Loaf, Bon Jovi, Wet Wet Wet, Rednex and Mariah Carey.

If you were to travel back to this day, notable figures such as Bill Hicks, John Candy, Kurt Cobain and Richard Nixon would all be still alive. On TV, people are watching popular shows such as "Sherlock Holmes", "Murder, She Wrote", "One Foot in the Grave" and "Frasier". Meanwhile, gamers are playing titles such as "FIFA International Soccer", "Mortal Kombat II", "Gunstar Heroes" and "Mario's Time Machine".

Kids and teenagers are watching TV shows such as "Roseanne", "Dinosaurs", "Boy Meets World" and "The Nanny". Popular toys at the moment include the likes of the Sega Genesis / Mega Drive, the Super Nintendo Entertainment System (SNES), Pogs / Milkcaps and Littlest Pet Shop.

These are trending news stories and fads that were prevalent at this time. These are topics that would have been in the media on January 4th, 1994.

Check out our personality summary for people who were born on January 4th, 1994.

Television shows that people were watching in January, 1994.

Popular video games that people were playing in January of 1994.

If you are looking for some childhood nostalgia, then you should check out January 4th, 2000 instead.

Bill Clinton was the President of the United States on January 4th, 1994.

John Major was the Prime Minister of the United Kingdom on January 4th, 1994.

Enter your date of birth below to find out how old you were on January 4th, 1994.
This information is not transmitted to our server.

Here are some fun statistics about January 4th, 1994.