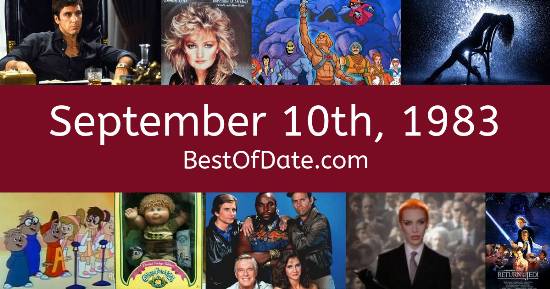 Songs that were on top of the music singles charts in the USA and the United Kingdom on September 10th, 1983.

This is the day that one of my favorite coworkers who mentored me in my first year of teaching was born.
Posted on October 13th, 2021 03:54

The date is September 10th, 1983 and it's a Saturday. Anyone born today will have the star sign Virgo. Currently, people are enjoying their weekend.

Schools have started back and autumn has arrived, so temperatures have started to cool and trees are beginning to shed their leaves. In America, the song Sweet Dreams by Eurythmics is on top of the singles charts. Over in the UK, Red Red Wine by UB40 is the number one hit song.

Because it's 1983, the radio stations are being dominated by artists such as Culture Club, Michael Jackson, Irene Cara, David Bowie and The Police. If you were to travel back to this day, notable figures such as Marvin Gaye and Truman Capote would be still alive. On TV, people are watching popular shows such as "Last of the Summer Wine", "Hart to Hart", "Knight Rider" and "The A-Team".

Meanwhile, gamers are playing titles such as "Space Invaders", "Asteroids", "Pac-Man" and "Mario Bros.". Children and teenagers are currently watching television shows such as "Mister Rogers' Neighborhood", "Fat Albert and the Cosby Kids", "Diff'rent Strokes" and "Fraggle Rock". If you're a kid or a teenager, then you're probably playing with toys such as the Easy-Bake Oven, Dungeons & Dragons, Fischer Price cassette player and Masters of the Universe (figures).

If you are looking for some childhood nostalgia, then check out September 10th, 1989 instead.

Ronald Reagan was the President of the United States on September 10th, 1983.

Margaret Thatcher was the Prime Minister of the United Kingdom on September 10th, 1983.

Enter your date of birth below to find out how old you were on September 10th, 1983.

Here are some fun statistics about September 10th, 1983.