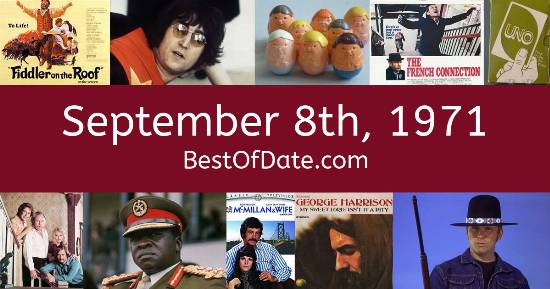 Songs that were on top of the music singles charts in the USA and the United Kingdom on September 8th, 1971.

The date is September 8th, 1971 and it's a Wednesday. Anyone born today will have the star sign Virgo. Schools have started back and autumn has arrived, so temperatures have started to cool and trees are beginning to shed their leaves.

In America, the song Uncle Albert Admiral Halsey by Paul & Linda McCartney is on top of the singles charts. Over in the UK, I'm Still Waiting by Diana Ross is the number one hit song. Richard Nixon is currently the President of the United States and Edward Heath is the Prime Minister of the United Kingdom.

Kids and teenagers are watching TV shows such as "The Bugs Bunny Show", "Underdog", "JOT the Dot" and "Sesame Street". Popular toys at the moment include the likes of Army men, Battleship (game), Clackers and Frisbee.

Richard Nixon was the President of the United States on September 8th, 1971.

Edward Heath was the Prime Minister of the United Kingdom on September 8th, 1971.

Enter your date of birth below to find out how old you were on September 8th, 1971.

Here are some fun statistics about September 8th, 1971.

Leave a comment and tell everyone why September 8th, 1971 is important to you.