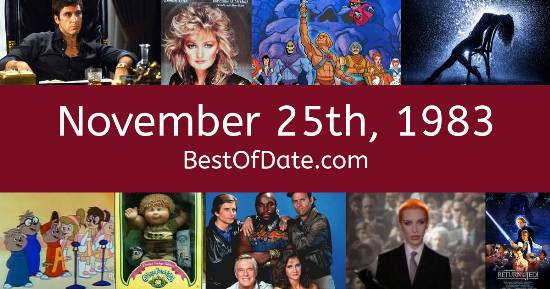 On November 25th, 1983, the following songs were at the top of the music charts in the USA and the UK.

The top "Box Office" movie on this date was the film "A Christmas Story".

The date is November 25th, 1983, and it's a Friday. Anyone born today will have the star sign Sagittarius. Currently, people have "that Friday feeling" and are looking forward to the weekend.

It is Black Friday in the United States - a day that many consider to be the start of the Christmas shopping season. It's November, so the evenings are getting darker and the days are getting colder. In America, the song All Night Long by Lionel Richie is on top of the singles charts.

Over in the UK, Uptown Girl by Billy Joel is the number one hit song. Ronald Reagan is currently the President of the United States, and the movie A Christmas Story is at the top of the Box Office. In the United Kingdom, Margaret Thatcher is the current Prime Minister.

On TV, people are watching popular shows such as "Columbo", "The Dukes of Hazzard", "Knots Landing" and "The A-Team". Meanwhile, gamers are playing titles such as "Lunar Lander", "Asteroids", "Pac-Man" and "Missile Command". Kids and teenagers are watching TV shows such as "Happy Days", "Cockleshell Bay", "Dogtanian and the Three Muskehounds" and "Inspector Gadget".

If you're a kid or a teenager, then you're probably playing with toys such as Operation, Speak & Spell, Monchhichi / Chicaboo and Fisher-Price Little People (Farm).

These are trending news stories and fads that were prevalent at this time. These are topics that would have been in the media on November 25th, 1983.

News stories, pop culture trends, and other events that happened around November 25th, 1983.

Check out our personality summary for people who were born on November 25th, 1983.

If you are looking for some childhood nostalgia, then you should check out November 25th, 1989, instead.

Celebrities, historical figures, and other notable people who were born on November 25th.

Ronald Reagan was the President of the United States on November 25th, 1983.

Find out what your age was on November 25th, 1983, by entering your DOB below.
This information is not saved on our server.

Here are some fun statistics about November 25th, 1983.