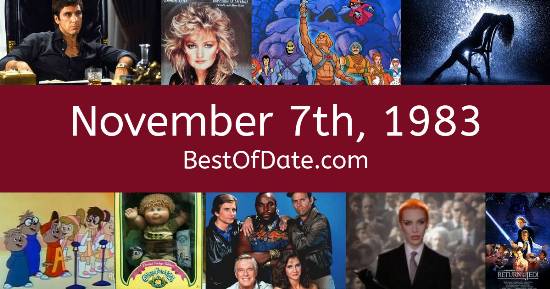 These songs were on top of the music charts in the United States and the United Kingdom on November 7th, 1983.

The movie "Deal of the Century" was at the top of the Box Office on November 7th, 1983.

The date is November 7th, 1983, and it's a Monday. Anyone born today will have the star sign Scorpio. It's November, so the evenings are getting darker and the days are getting colder.

In America, the song Island In The Stream by Kenny Rogers & Dolly Parton is on top of the singles charts. Over in the UK, Uptown Girl by Billy Joel is the number one hit song. Ronald Reagan is currently the President of the United States, and the movie Deal of the Century is at the top of the Box Office.

If you were to travel back to this day, notable figures such as Marvin Gaye and Truman Capote would be still alive. On TV, people are watching popular shows such as "Last of the Summer Wine", "The Jeffersons", "Knots Landing" and "Knight Rider". Meanwhile, gamers are playing titles such as "Space Invaders", "Asteroids", "Galaxian" and "Missile Command".

Kids and teenagers are watching TV shows such as "Fat Albert and the Cosby Kids", "Inspector Gadget", "He-Man and the Masters of the Universe" and "Alvin and the Chipmunks". Popular toys at the moment include the likes of Water Ring Toss, Screwball Scramble, Intellivision (games console) and Turnin' Turbo Dashboard.

These are trending news stories and fads that were prevalent at this time. These are topics that would have been in the media on November 7th, 1983.

News stories, pop culture trends, and other events that happened around November 7th, 1983.

Check out our personality summary for people who were born on November 7th, 1983.

If you are looking for some childhood nostalgia, then you should check out November 7th, 1989, instead.

Celebrities, historical figures, and other notable people who were born on November 7th.

Rapper.
Born on November 7th, 1988
He was born exactly 5 years after this date.

Soccer player.
Born on November 7th, 1990
He was born exactly 7 years after this date.

Singer.
Born on November 7th, 1996
She was born exactly 13 years after this date.

Soccer player.
Born on November 7th, 2000
He was born exactly 17 years after this date.

Ronald Reagan was the President of the United States on November 7th, 1983.

Find out what your age was on November 7th, 1983, by entering your DOB below.
This information is not saved on our server.

Here are some fun statistics about November 7th, 1983.