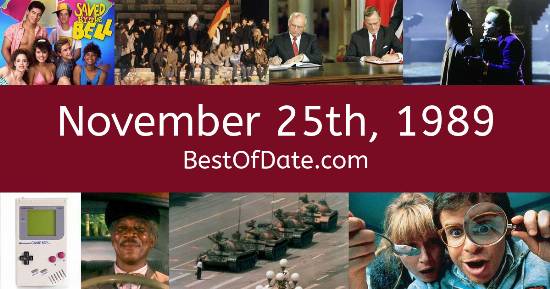 Songs that were on top of the music singles charts in the USA and the United Kingdom on November 25th, 1989:

The date is November 25th, 1989 and it's a Saturday. Anyone born today will have the star sign Sagittarius. Currently, people are enjoying their weekend.

In America, Thanksgiven Day and Black Friday have recently come and passed. People are now beginning to look forward to Christmas. It's November, so the evenings are getting darker and the days are getting colder. In America, the song Blame It On The Rain by Milli Vanilli is on top of the singles charts.

Over in the UK, You Got It by New Kids on the Block is the number one hit song. George W. Bush Snr. is currently the President of the United States and the movie Harlem Nights is at the top of the Box Office. In the United Kingdom, Margaret Thatcher is the current Prime Minister.

Meanwhile, gamers are playing titles such as "Tetris", "Altered Beast", "SimCity" and "Super Mario Land". Children and teenagers are currently watching television shows such as "The Real Ghostbusters", "Full House", "Fireman Sam" and "Chip 'n' Dale's Rescue Rangers". If you're a kid or a teenager, then you're probably playing with toys such as "Speak & Spell", "Big wheel (tricycle)", "Popples" and "Micro Machines".

Celebrities, historical figures and noteable people who were born on the 25th of November:

Who was the Prime Minister of the United Kingdom on November 25th, 1989?

Enter your date of birth below to find out how old you were on November 25th, 1989.

Looking for some nostalgia? Here are some Youtube videos relating to November 25th, 1989. Please note that videos are automatically selected by Youtube and that results may vary! Click on the "Load Next Video" button to view the next video in the search playlist. In many cases, you'll find episodes of old TV shows, documentaries, music videos and soap dramas.

Here are some fun statistics about November 25th, 1989.