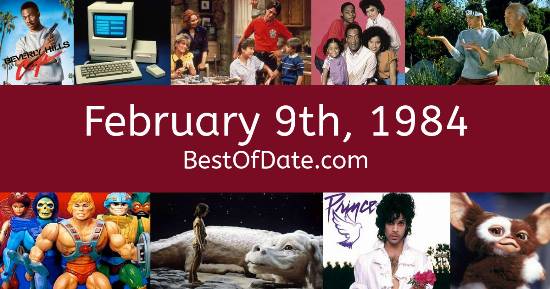 Songs that were on top of the music singles charts in the USA and the United Kingdom on February 9th, 1984.

The movie "Terms of Endearment" was at the top of the box office on February 9th, 1984.

The date is February 9th, 1984 and it's a Thursday. Anyone born today will have the star sign Aquarius. Valentine's Day is just around the corner.

In America, the song Karma Chameleon by Culture Club is on top of the singles charts. Over in the UK, Relax by Frankie goes to Hollywood is the number one hit song. Ronald Reagan is currently the President of the United States and the movie Terms of Endearment is at the top of the Box Office.

On TV, people are watching popular shows such as "Three's Company", "Hart to Hart", "Family Ties" and "He-Man and the Masters of the Universe". Meanwhile, gamers are playing titles such as "Lunar Lander", "Asteroids", "Galaxian" and "Missile Command". Children and teenagers are currently watching television shows such as "The Bugs Bunny Show", "Happy Days", "Fraggle Rock" and "G.I. Joe: A Real American Hero".

If you're a kid or a teenager, then you're probably playing with toys such as Water Ring Toss, Snoopy Sno-Cone Machine, Big wheel (tricycle) and Fisher-Price Little People (Farm).

Ronald Reagan was the President of the United States on February 9th, 1984.

Margaret Thatcher was the Prime Minister of the United Kingdom on February 9th, 1984.

Enter your date of birth below to find out how old you were on February 9th, 1984.

Here are some fun statistics about February 9th, 1984.

Leave a comment and tell everyone why February 9th, 1984 is important to you.