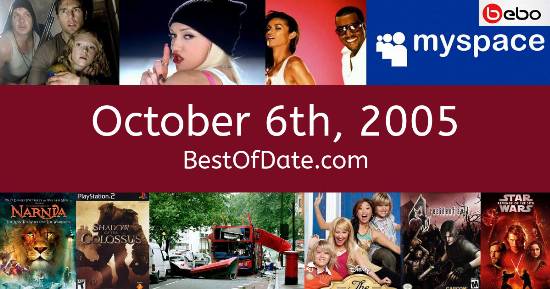 Songs that were on top of the music singles charts in the USA and the United Kingdom on October 6th, 2005.

The movie "Flightplan" was at the top of the box office on October 6th, 2005.

The date is October 6th, 2005 and it's a Thursday. Anyone born today will have the star sign Libra. The summer is long gone. Temperatures have started to become much cooler and the evenings are beginning to get darker.

Fallen leaves have carpeted driveways, lawns, pathways and sidewalks and there's a fresh earthy scent in the ear. In America, the song Gold Digger by Kanye West & Jamie Foxx is on top of the singles charts. Over in the UK, Don't Cha by Pussycat Dolls is the number one hit song.

George W. Bush Jnr. is currently the President of the United States and the movie Flightplan is at the top of the Box Office. In the United Kingdom, Tony Blair is the current Prime Minister. In technology news, more and more people are beginning to gain access to the Internet. Internet speeds are increasing and MP3 sharing is beginning to threaten the existence of music stores.

If you were to travel back to this day, notable figures such as Rosa Parks, Eddie Guerrero, George Best and Richard Pryor would all be still alive. On TV, people are watching popular shows such as "Scrubs", "Without a Trace", "Two and a Half Men" and "Joey". Meanwhile, gamers are playing titles such as "RuneScape", "Killzone", "The Legend of Zelda: The Minish Cap" and "Psychonauts".

Kids and teenagers are watching TV shows such as "Grizzly Tales for Gruesome Kids", "Malcolm in the Middle", "Veronica Mars" and "Avatar: The Last Airbender". If you're a kid or a teenager, then you're probably playing with toys such as the PlayStation 2, Bratz dolls, the Xbox and RoboSapien (toy robot).

If you are looking for some childhood nostalgia, then check out October 6th, 2011 instead.

George W. Bush Jnr. was the President of the United States on October 6th, 2005.

Tony Blair was the Prime Minister of the United Kingdom on October 6th, 2005.

Enter your date of birth below to find out how old you were on October 6th, 2005.

Here are some fun statistics about October 6th, 2005.