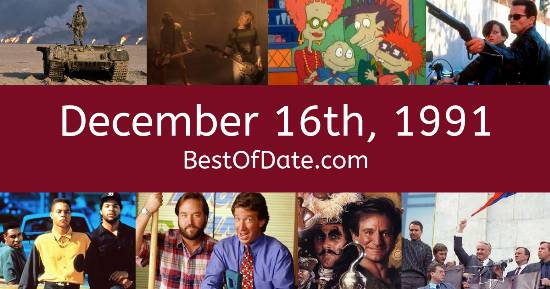 These songs were on top of the music charts in the United States and the United Kingdom on December 16th, 1991.

The movie "Star Trek VI: The Undiscovered Country" was at the top of the Box Office on this day.

The date is December 16th, 1991, and it's a Monday. Anyone born today will have the star sign Sagittarius. The Christmas season of 1991 is in full swing. People are putting up their decorations and festive songs are playing on the radio.

In America, the song Black Or White by Michael Jackson is on top of the singles charts. Over in the UK, Bohemian Rhapsody / These Are The Days Of Our Lives by Queen is the number one hit song. George W. Bush Snr. is currently the President of the United States, and the movie Star Trek VI: The Undiscovered Country is at the top of the Box Office.

In Europe, the Soviet Union is coming to an end as the leaders of Russia, Belarus and Ukraine agree to dissolve the union. The film Hook, starring Robin Williams, is currently showing in movie theaters. In celebrity news, actor Richard Gere has married supermodel Cindy Crawford at a ceremony in Las Vegas.

If you were to travel back to this day, notable figures such as Robert Reed and Anthony Perkins would be still alive. On TV, people are watching popular shows such as "The Cosby Show", "Who's the Boss?", "The Golden Girls" and "Home Improvement". Meanwhile, gamers are playing titles such as "Sonic the Hedgehog", "Streets of Rage", "F-Zero" and "Super Castlevania IV".

Kids and teenagers are watching TV shows such as "Fireman Sam", "Mr. Bean", "Are You Afraid of the Dark?" and "Doug". Popular toys at the moment include the likes of My Little Pony (figures), Micro Machines, the SEGA Game Gear and Super Soaker (water gun).

These are trending news stories and fads that were prevalent at this time. These are topics that would have been in the media on December 16th, 1991.

Check out our personality summary for people who were born on December 16th, 1991.

Television shows that people were watching in December, 1991.

Popular video games that people were playing in December of 1991.

If you are looking for some childhood nostalgia, then you should check out December 16th, 1997 instead.

George W. Bush Snr. was the President of the United States on December 16th, 1991.

John Major was the Prime Minister of the United Kingdom on December 16th, 1991.

Enter your date of birth below to find out how old you were on December 16th, 1991.
This information is not transmitted to our server.

Here are some fun statistics about December 16th, 1991.