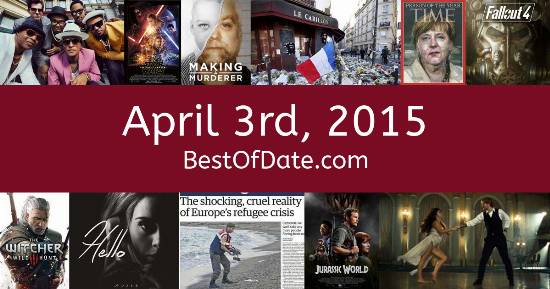 Songs that were on top of the music singles charts in the USA and the United Kingdom on April 3rd, 2015:

The date is April 3rd, 2015 and it's a Friday. Anyone born today will have the star sign Aries. Currently, people have "that Friday feeling" and are looking forward to the weekend.

The summer of 2015 is drawing closer and temperatures have started to rise. In America, the song Uptown Funk by Mark Ronson featuring Bruno Mars is on top of the singles charts. Over in the UK, Lay Me Down by Sam Smith featuring John Legend is the number one hit song.

Barack Obama is currently the President of the United States and the movie Home is at the top of the Box Office. In the United Kingdom, David Cameron is the current Prime Minister. A social networking website called Vine is extremely popular at the moment.

It's 2015, so the music charts are being dominated by the likes of OMI, Bruno Mars, Ellie Goulding, Adele, Justin Bieber and Hozier. It has just been announced that singer Zayn Malik has left the band One Direction. Top Gear presenter Jeremy Clarkson has recently been sacked by the BBC following allegations that he assaulted a producer.

A new video streaming app called Periscope has just been launched. 150 people have tragically lost their lives after Germanwings Flight 9525 recently crashed into the French Alps. News reports suggest that one of the co-pilots was suicidal and that he deliberately caused the crash. In wrestling, Seth Rollins has just defeated Roman Reigns and Brock Lesnar in a triple threat match at Wrestlemania 31.

Australia have just won the 2015 Cricket World Cup. On TV, people are watching popular shows such as "Bones", "The Vampire Diaries", "Game of Thrones" and "Black Mirror". Meanwhile, gamers are playing titles such as "Destiny", "Alien: Isolation", "Assassin's Creed: Unity" and "Far Cry 4".

Children and teenagers are currently watching television shows such as "Phineas and Ferb", "Jessie", "Austin & Ally" and "Every Witch Way". If you're a kid or a teenager, then you're probably playing with toys such as "PlayStation 4" and "Xbox One".

Celebrities, historical figures and noteable people who were born on the 3rd of April:

Who was the Prime Minister of the United Kingdom on April 3rd, 2015?

Enter your date of birth below to find out how old you were on April 3rd, 2015.

Looking for some nostalgia? Here are some Youtube videos relating to April 3rd, 2015. Please note that videos are automatically selected by Youtube and that results may vary! Click on the "Load Next Video" button to view the next video in the search playlist. In many cases, you'll find episodes of old TV shows, documentaries, music videos and soap dramas.

Here are some fun statistics about April 3rd, 2015.