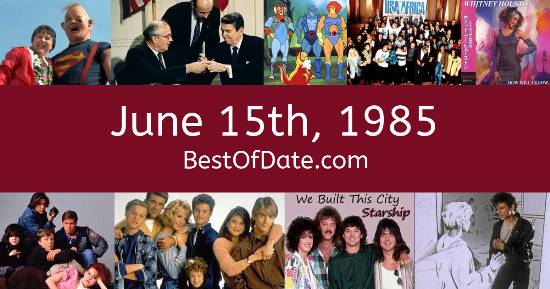 These songs were on top of the music charts in the United States and the United Kingdom on June 15th, 1985.

The movie "Rambo: First Blood Part II" was at the top of the Box Office on this day.

The date is June 15th, 1985, and it's a Saturday. Anyone born today will have the star sign Gemini. Currently, people are enjoying their weekend.

It's summer, so the temperatures are warmer and the evenings are longer than usual. In America, the song Everybody Wants To Rule The World by Tears for Fears is on top of the singles charts. Over in the UK, You'll Never Walk Alone by Crowd is the number one hit song.

Because it's 1985, the radio stations are being dominated by the likes of Tears For Fears, USA For Africa, A-ha, Foreigner, Madonna, Wham! and Phil Collins. If you were to travel back to this day, notable figures such as Rock Hudson, Ian Stewart, Paul Castellano and Phil Lynott would all be still alive. On TV, people are watching popular shows such as "Last of the Summer Wine", "The Jeffersons", "Knight Rider" and "Miami Vice".

Meanwhile, gamers are playing titles such as "Lunar Lander", "Asteroids", "Galaxian" and "Tetris". Kids and teenagers are watching TV shows such as "He-Man and the Masters of the Universe", "G.I. Joe: A Real American Hero", "Alvin and the Chipmunks" and "The Transformers". If you're a kid or a teenager, then you're probably playing with toys such as Speak & Spell, Snoopy Sno-Cone Machine, Monchhichi / Chicaboo and Garbage Pail Kids (trading cards).

These are trending news stories and fads that were prevalent at this time. These are topics that would have been in the media on June 15th, 1985.

News stories, pop culture trends, and other events that happened around June 15th, 1985.

Check out our personality summary for people who were born on June 15th, 1985.

If you are looking for some childhood nostalgia, then you should check out June 15th, 1991, instead.

Celebrities, historical figures, and other notable people who were born on June 15th.

Ronald Reagan was the President of the United States on June 15th, 1985.

Find out what your age was on June 15th, 1985, by entering your DOB below.
This information is not saved on our server.