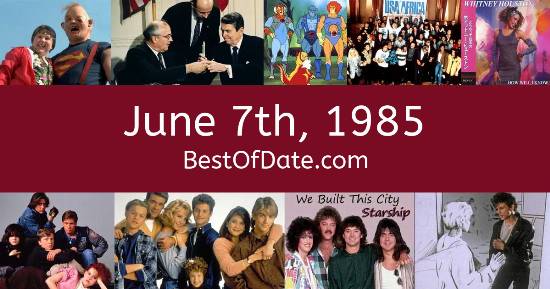 Songs that were on top of the music singles charts in the USA and the United Kingdom on June 7th, 1985.

The date is June 7th, 1985 and it's a Friday. Anyone born today will have the star sign Gemini. Currently, people have "that Friday feeling" and are looking forward to the weekend.

It's summer, so the temperatures are warmer and the evenings are longer than usual. In America, the song Everybody Wants To Rule The World by Tears for Fears is on top of the singles charts. Over in the UK, 19 by Paul Hardcastle is the number one hit song.

Ronald Reagan is currently the President of the United States and the movie Code of Silence is at the top of the Box Office. In the United Kingdom, Margaret Thatcher is the current Prime Minister. In fashion, women are currently wearing long sweaters, fishnet stockings, fingerless gloves, jumpsuits, over-sized scarves, miniskirts, stirrup pants and spandex cycling shorts. Meanwhile, men are wearing Hawaiian shirts, flannel, shell suits and wool sport coats.

Because it's 1985, the radio stations are being dominated by the likes of Tears For Fears, USA For Africa, A-ha, Foreigner, Madonna, Wham! and Phil Collins. If you were to travel back to this day, notable figures such as Rock Hudson, Paul Castellano, Phil Lynott and Christa McAuliffe would all be still alive. On TV, people are watching popular shows such as "Columbo.", "Last of the Summer Wine", "He-Man and the Masters of the Universe" and "Miami Vice".

If you are looking for some childhood nostalgia, then check out June 7th, 1991 instead.

Australian singer.
Born on June 7th, 1990
She was born exactly 5 years after this date.

Ronald Reagan was the President of the United States on June 7th, 1985.

Margaret Thatcher was the Prime Minister of the United Kingdom on June 7th, 1985.

Enter your date of birth below to find out how old you were on June 7th, 1985.

Here are some fun statistics about June 7th, 1985.