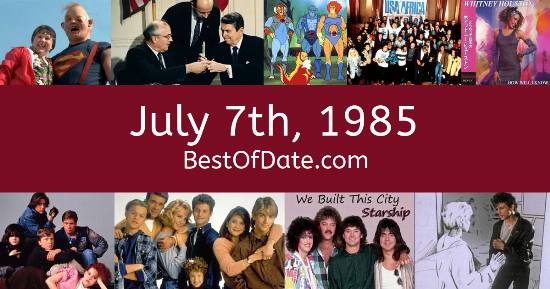 Songs that were on top of the music singles charts in the USA and the United Kingdom on July 7th, 1985.

The date is July 7th, 1985 and it's a Sunday. Anyone born today will have the star sign Cancer. Currently, people are enjoying their weekend.

Because it's 1985, the radio stations are being dominated by the likes of Tears For Fears, USA For Africa, A-ha, Foreigner, Madonna, Wham! and Phil Collins. On TV, people are watching popular shows such as "Columbo.", "Dallas", "Who's the Boss?" and "Miami Vice". Meanwhile, gamers are playing titles such as "Space Invaders", "Lunar Lander", "Asteroids" and "The Way of the Exploding Fist".

Kids and teenagers are watching TV shows such as "Fraggle Rock", "G.I. Joe: A Real American Hero", "Alvin and the Chipmunks" and "Dungeons & Dragons". Popular toys at the moment include the likes of Lite-Brite, Dungeons & Dragons, Speak & Spell and Big wheel (tricycle).

A Spotify playlist of songs from the year 1985. Take a trip back to the days of Bryan Adams, a-ha, Phil Collins and Huey Lewis and the News.

Celebrities, historical figures and notable people who were born on the 7th of July.

Ronald Reagan was the President of the United States on July 7th, 1985.

Margaret Thatcher was the Prime Minister of the United Kingdom on July 7th, 1985.

Enter your date of birth below to find out how old you were on July 7th, 1985.

Here are some fun statistics about July 7th, 1985.

Leave a comment and tell everyone why July 7th, 1985 is important to you.