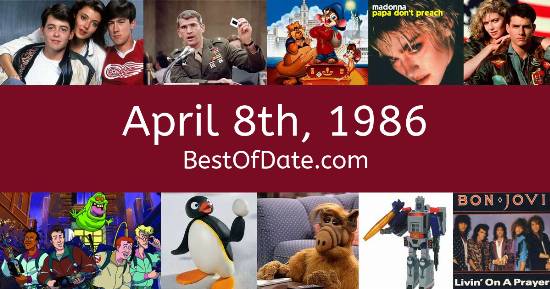 Songs that were on top of the music singles charts in the USA and the United Kingdom on April 8th, 1986.

The date is April 8th, 1986 and it's a Tuesday. Anyone born today will have the star sign Aries. The summer of 1986 is drawing closer and temperatures have started to rise.

In America, the song Rock Me Amadeus by Falco is on top of the singles charts. Over in the UK, Living Doll by Cliff Richard & Young Ones is the number one hit song. Ronald Reagan is currently the President of the United States and the movie Police Academy 3 is at the top of the Box Office.

If you were to travel back to this day, notable figures such as Len Bias, Cliff Burton, Gia Carangi and Liberace would all be still alive. On TV, people are watching popular shows such as "Dallas", "The Cosby Show", "Charles in Charge" and "The Golden Girls". Meanwhile, gamers are playing titles such as "Tetris", "Boulder Dash", "Back to the Future" and "Super Mario Bros.".

Children and teenagers are currently watching television shows such as "Inspector Gadget", "Fraggle Rock", "ThunderCats" and "Adventures of the Gummi Bears". Popular toys at the moment include the likes of Space Lego, the Commodore 64, My Little Pony (figures) and the Nintendo Entertainment System.

If you are looking for some childhood nostalgia, then check out April 8th, 1992 instead.

Celebrities, historical figures and other notable people who were born on April 8th.

South Korean singer. Deceased
Born on April 8th, 1990
He was born exactly 4 years after this date.

Ronald Reagan was the President of the United States on April 8th, 1986.

Margaret Thatcher was the Prime Minister of the United Kingdom on April 8th, 1986.

Enter your date of birth below to find out how old you were on April 8th, 1986.

Here are some fun statistics about April 8th, 1986.