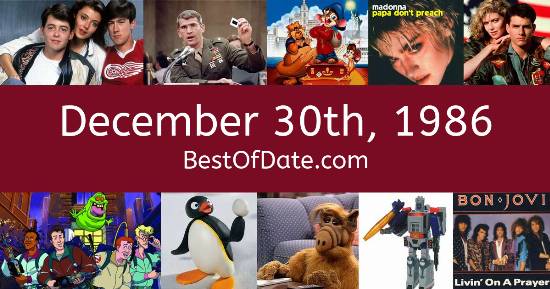 On December 30th, 1986, the following songs were at the top of the music charts in the USA and the UK.

The top "Box Office" movie on this date was the film "The Golden Child".

The date is December 30th, 1986, and it's a Tuesday. Anyone born today will have the star sign Capricorn. Christmas Day of 1986 has just passed and many people are relaxing at home and enjoying the holiday season.

In America, the song Walk Like An Egyptian by The Bangles is on top of the singles charts. Over in the UK, Reet Petite by Jackie Wilson is the number one hit song. Ronald Reagan is currently the President of the United States, and the movie The Golden Child is at the top of the Box Office.

If you were to travel back to this day, notable figures such as Liberace, Andy Warhol, Fred Astaire and Lee Marvin would all be still alive. On TV, people are watching popular shows such as "Dallas", "Scarecrow and Mrs. King", "The Cosby Show" and "Charles in Charge". Meanwhile, gamers are playing titles such as "Pac-Man", "Duck Hunt", "Ultima IV: Quest of the Avatar" and "The Legend of Zelda".

Kids and teenagers are watching TV shows such as "The Smurfs", "Fraggle Rock", "Alvin and the Chipmunks" and "The New Adventures of Jonny Quest". If you're a kid or a teenager, then you're probably playing with toys such as Snoopy Sno-Cone Machine, Big wheel (tricycle), Teddy Ruxpin and Popples.

These are trending news stories and fads that were prevalent at this time. These are topics that would have been in the media on December 30th, 1986.

Check out our personality summary for people who were born on December 30th, 1986.

Television shows that people were watching in December, 1986.

Popular video games that people were playing in December of 1986.

If you are looking for some childhood nostalgia, then you should check out December 30th, 1992 instead.

BTS member.
Born on December 30th, 1995
He was born exactly 9 years after this date.

Ronald Reagan was the President of the United States on December 30th, 1986.

Margaret Thatcher was the Prime Minister of the United Kingdom on December 30th, 1986.

Enter your date of birth below to find out how old you were on December 30th, 1986.
This information is not transmitted to our server.

Here are some fun statistics about December 30th, 1986.