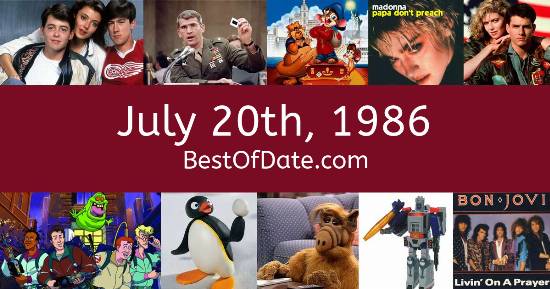 Songs that were on top of the music singles charts in the USA and the United Kingdom on July 20th, 1986.

The date is July 20th, 1986 and it's a Sunday. Anyone born today will have the star sign Cancer. Currently, people are enjoying their weekend.

It's summer, so the temperatures are warmer and the evenings are longer than usual. In America, the song Invisible Touch by Genesis is on top of the singles charts. Over in the UK, Papa Don't Preach by Madonna is the number one hit song.

Ronald Reagan is currently the President of the United States and the movie Karate Kid 2 is at the top of the Box Office. In the United Kingdom, Margaret Thatcher is the current Prime Minister. Because it's 1986, the radio stations are being dominated by the likes of Falco, Madonna, the Pet Shop Boys, Berlin, Whitney Houston, Dionne and Huey Lewis and the News.

Children and teenagers are currently watching television shows such as "The Bugs Bunny Show", "Muppet Babies", "Heathcliff & the Catillac Cats" and "Jem and the Holograms". Popular toys at the moment include the likes of Water Ring Toss, the Commodore 64, Transformers and Pogo ball / Lolo ball.

If you are looking for some childhood nostalgia, then check out July 20th, 1992 instead.

Celebrities, historical figures and notable people who were born on the 20th of July.

Ronald Reagan was the President of the United States on July 20th, 1986.

Margaret Thatcher was the Prime Minister of the United Kingdom on July 20th, 1986.