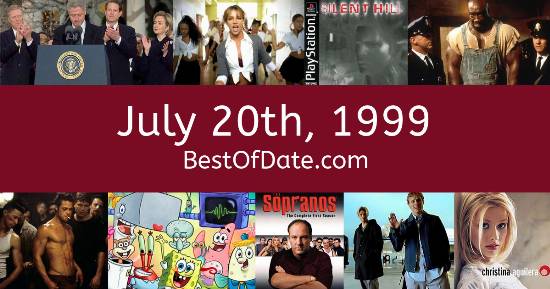 Songs that were on top of the music singles charts in the USA and the United Kingdom on July 20th, 1999.

The date is July 20th, 1999 and it's a Tuesday. Anyone born today will have the star sign Cancer. It's summer, so the temperatures are warmer and the evenings are longer than usual.

In America, the song Bills Bills Bills by Destiny's Child is on top of the singles charts. Over in the UK, Livin' La Vida Loca by Ricky Martin is the number one hit song. Bill Clinton is currently the President of the United States and the movie Eyes Wide Shut is at the top of the Box Office.

J. K. Rowling has just published "Harry Potter and the Prisoner of Azkaban", which is her third novel in the Harry Potter series. If you were to travel back to this day, notable figures such as Walter Payton, Big Pun, Tom Landry and David Tomlinson would all be still alive. On TV, people are watching popular shows such as "Xena: Warrior Princess", "Oz", "Stargate SG-1" and "Ally McBeal".

Meanwhile, gamers are playing titles such as "Spyro the Dragon", "Half-Life", "Baldur's Gate" and "SimCity 3000". Kids and teenagers are watching TV shows such as "Round the Twist", "Tales from the Cryptkeeper", "Mortal Kombat: Defenders of the Realm" and "Cow And Chicken". Popular toys at the moment include the likes of Screwball Scramble, Fisher-Price Great Adventures Castle, the Nintendo 64 and Groovy Girls.

If you are looking for some childhood nostalgia, then check out July 20th, 2005 instead.

Bill Clinton was the President of the United States on July 20th, 1999.

Tony Blair was the Prime Minister of the United Kingdom on July 20th, 1999.