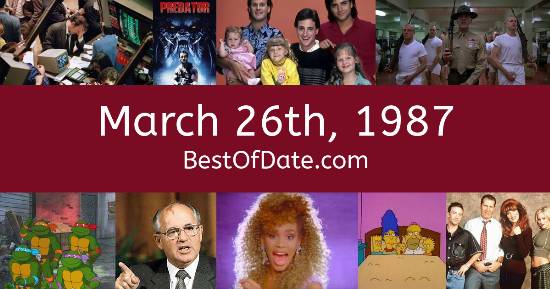 Songs that were on top of the music singles charts in the USA and the United Kingdom on March 26th, 1987.

The date is March 26th, 1987 and it's a Thursday. Anyone born today will have the star sign Aries. Spring has arrived and the days have become longer.

In America, the song Lean On Me by Club Nouveau is on top of the singles charts. Over in the UK, Respectable by Mel & Kim is the number one hit song. Ronald Reagan is currently the President of the United States and the movie Lethal Weapon is at the top of the Box Office.

If you were to travel back to this day, notable figures such as Fred Astaire, Lee Marvin, James Baldwin and Heather O'Rourke would all be still alive. On TV, people are watching popular shows such as "The Two Ronnies", "Scarecrow and Mrs. King", "The Transformers" and "Miami Vice". Meanwhile, gamers are playing titles such as "Mario Bros.", "Duck Hunt", "Boulder Dash" and "Paperboy".

Kids and teenagers are watching TV shows such as "Muppet Babies", "She-Ra: Princess of Power", "Pingu" and "Popples". Popular toys at the moment include the likes of Lite-Brite, Pound Puppies, Sylvanian Families and Hot Looks (fashion model dolls).

If you are looking for some childhood nostalgia, then check out March 26th, 1993 instead.

Ronald Reagan was the President of the United States on March 26th, 1987.

Margaret Thatcher was the Prime Minister of the United Kingdom on March 26th, 1987.

Enter your date of birth below to find out how old you were on March 26th, 1987.