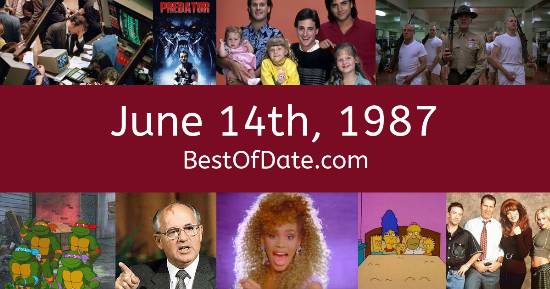 Songs that were on top of the music singles charts in the USA and the United Kingdom on June 14th, 1987.

The date is June 14th, 1987 and it's a Sunday. Anyone born today will have the star sign Gemini. Currently, people are enjoying their weekend.

It's summer, so the temperatures are warmer and the evenings are longer than usual. In America, the song Always by Atlantic Starr is on top of the singles charts. Over in the UK, I Wanna Dance With Somebody by Whitney Houston is the number one hit song.

Because it's 1987, the radio stations are being dominated by the likes of Los Lobos, Rick Astley, Whitney Houston, the Pet Shop Boys, Bon Jovi, U2 and Madonna. On TV, people are watching popular shows such as "Columbo.", "Sherlock Holmes", "Married... with Children" and "21 Jump Street". Meanwhile, gamers are playing titles such as "Missile Command", "Mario Bros.", "Ultima IV: Quest of the Avatar" and "Zelda II: The Adventure of Link".

Children and teenagers are currently watching television shows such as "The Transformers", "The Cosby Show", "The Flintstone Kids" and "ALF". If you're a kid or a teenager, then you're probably playing with toys such as Water Ring Toss, Big wheel (tricycle), the Commodore 64 and Hot Looks (fashion model dolls).

If you are looking for some childhood nostalgia, then check out June 14th, 1993 instead.

Celebrities, historical figures and notable people who were born on the 14th of June.

Ronald Reagan was the President of the United States on June 14th, 1987.

Margaret Thatcher was the Prime Minister of the United Kingdom on June 14th, 1987.