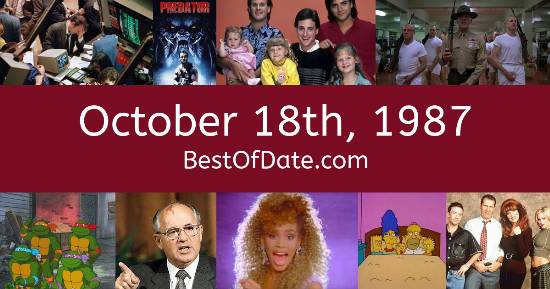 These songs were on top of the music charts in the United States and the United Kingdom on October 18th, 1987.

The movie "Stakeout" was at the top of the Box Office on this day.

The date is October 18th, 1987, and it's a Sunday. Anyone born today will have the star sign Libra. Currently, people are enjoying their weekend.

The summer is long gone. Temperatures have started to become much cooler and the evenings are beginning to get darker. Fallen leaves have carpeted driveways, lawns, pathways and sidewalks and there's a fresh earthy scent in the ear. In America, the song Lost In Emotion by Lisa Lisa & Cult Jam is on top of the singles charts.

Over in the UK, You Win Again by The Bee Gees is the number one hit song. Ronald Reagan is currently the President of the United States, and the movie Stakeout is at the top of the Box Office. In the United Kingdom, Margaret Thatcher is the current Prime Minister.

In fashion, women are currently wearing sweater dresses, short skirts, small shoulder pads, animal print, long full wool coats and bulky sweaters. Meanwhile, men are wearing tracksuits, sweatshirts, Nike Air Jordan shoes and denim. Because it's 1987, the radio stations are being dominated by the likes of Los Lobos, Rick Astley, Whitney Houston, the Pet Shop Boys, Bon Jovi, U2 and Madonna. If you were to travel back to this day, notable figures such as James Baldwin, Heather O'Rourke, Andy Gibb and Judith Barsi would all be still alive.

On TV, people are watching popular shows such as "Last of the Summer Wine", "Family Ties", "My Two Dads" and "Star Trek: The Next Generation". Meanwhile, gamers are playing titles such as "Boulder Dash", "Paperboy", "Punch-Out!!" and "Maniac Mansion ". Kids and teenagers are watching TV shows such as "Alvin and the Chipmunks", "The Cosby Show", "SilverHawks" and "The New Adventures of Jonny Quest".

If you're a kid or a teenager, then you're probably playing with toys such as Cabbage Patch Kids, Fisher-Price Little People (Farm), My Little Pony (figures) and Koosh Ball.

These are trending news stories and fads that were prevalent at this time. These are topics that would have been in the media on October 18th, 1987.

Check out our personality summary for people who were born on October 18th, 1987.

If you are looking for some childhood nostalgia, then you should check out October 18th, 1993 instead.

Internet personality.
Born on October 18th, 1991
He was born exactly 4 years after this date.

Ronald Reagan was the President of the United States on October 18th, 1987.

Margaret Thatcher was the Prime Minister of the United Kingdom on October 18th, 1987.

Enter your date of birth below to find out how old you were on October 18th, 1987.
This information is not transmitted to our server.

Here are some fun statistics about October 18th, 1987.