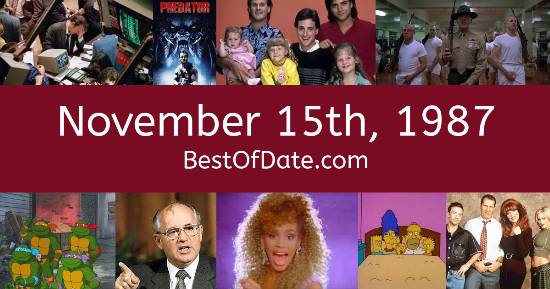 These songs were on top of the music charts in the United States and the United Kingdom on November 15th, 1987.

The movie "Fatal Attraction" was at the top of the Box Office on this day.

The date is November 15th, 1987, and it's a Sunday. Anyone born today will have the star sign Scorpio. Currently, people are enjoying their weekend.

It's November, so the evenings are getting darker and the days are getting colder. In America, the song I Think We're Alone Now by Tiffany is on top of the singles charts. Over in the UK, China In Your Hand by T'Pau is the number one hit song.

Because it's 1987, the radio stations are being dominated by the likes of Los Lobos, Rick Astley, Whitney Houston, the Pet Shop Boys, Bon Jovi, U2 and Madonna. If you were to travel back to this day, notable figures such as James Baldwin, Heather O'Rourke, Andy Gibb and Judith Barsi would all be still alive. On TV, people are watching popular shows such as "Last of the Summer Wine", "Miami Vice", "The Golden Girls" and "Star Trek: The Next Generation".

Meanwhile, gamers are playing titles such as "Boulder Dash", "Ultima IV: Quest of the Avatar", "Punch-Out!!" and "Metroid". Kids and teenagers are watching TV shows such as "Jem and the Holograms", "The New Adventures of Jonny Quest", "21 Jump Street" and "DuckTales". If you're a kid or a teenager, then you're probably playing with toys such as Lite-Brite, Fisher-Price Little People (Farm), Mr Frosty and Jenga.

These are trending news stories and fads that were prevalent at this time. These are topics that would have been in the media on November 15th, 1987.

News stories and other events that happened around November 15th, 1987.

Check out our personality summary for people who were born on November 15th, 1987.

Television shows that people were watching in November, 1987.

Popular video games that people were playing in November of 1987.

If you are looking for some childhood nostalgia, then you should check out November 15th, 1993 instead.

Soccer player.
Born on November 15th, 1993
He was born exactly 6 years after this date.

Rugby player.
Born on November 15th, 1996
He was born exactly 9 years after this date.

Ronald Reagan was the President of the United States on November 15th, 1987.

Margaret Thatcher was the Prime Minister of the United Kingdom on November 15th, 1987.

Find out what your age was on November 15th, 1987, by entering your DOB below.
This information is not saved on our server.

Here are some fun statistics about November 15th, 1987.