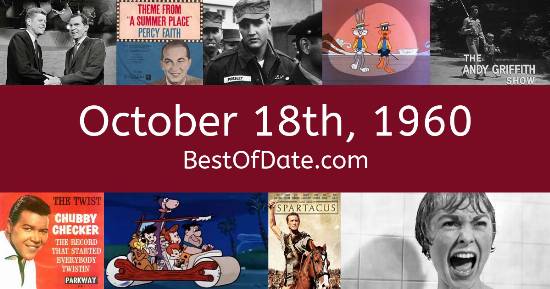 Songs that were on top of the music singles charts in the USA and the United Kingdom on October 18th, 1960.

The date is October 18th, 1960 and it's a Tuesday. Anyone born today will have the star sign Libra. The summer is long gone. Temperatures have started to become much cooler and the evenings are beginning to get darker.

Fallen leaves have carpeted driveways, lawns, pathways and sidewalks and there's a fresh earthy scent in the ear. In America, the song Save The Last Dance For Me by The Drifters is on top of the singles charts. Over in the UK, Tell Laura I Love Her by Ricky Valance is the number one hit song.

Dwight David Eisenhower is currently the President of the United States and the movie The Dark at the Top of the Stairs is at the top of the Box Office. In the United Kingdom, Harold Macmillan is the current Prime Minister. Tailfins on cars are extremely popular at the moment. The design looks futuristic, almost like a rocket or the twin rudders on the back of an airplane.

Because it's 1960, radio stations are playing hit songs from artists such as Percy Faith, Elvis Presley, The Everly Brothers, Connie Francis and Johnny Preston. In fashion, many of the trends from the late 1950s are still popular. Women are wearing tailored skirts, short boxy jackets and shift dresses. Trousers are also becoming popular amongst women. Meanwhile, men are wearing polo shirts, argyle socks, sweater vests, loafers and harrington jackets. Historical drama film "Spartacus" is currently being shown in movie theaters.

If you were to travel back to this day, notable figures such as Clark Gable and Ernest Hemingway would be still alive. On TV, people are watching popular shows such as "Tonight Starring Jack Paar", "The Untouchables", "Danger Man" and "Route 66". Children and teenagers are currently watching television shows such as "Father Knows Best", "The Gumby Show", "Leave It to Beaver" and "Felix the Cat".

If you're a kid or a teenager, then you're probably playing with toys such as the Frisbee, Fisher Price Little People, Matchbox toy cars and Etch A Sketch.

If you are looking for some childhood nostalgia, then check out October 18th, 1966 instead.

Internet personality.
Born on October 18th, 1991
He was born exactly 31 years after this date.

Dwight David Eisenhower was the President of the United States on October 18th, 1960.

Harold Macmillan was the Prime Minister of the United Kingdom on October 18th, 1960.

Enter your date of birth below to find out how old you were on October 18th, 1960.

Here are some fun statistics about October 18th, 1960.