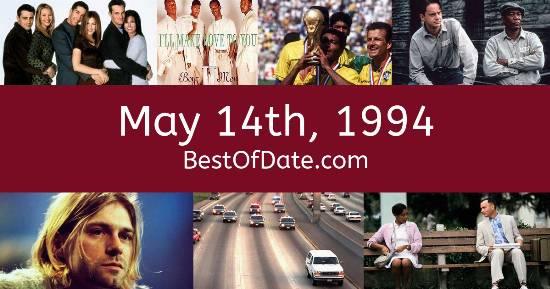 Songs that were on top of the music singles charts in the USA and the United Kingdom on May 14th, 1994.

The date is May 14th, 1994 and it's a Saturday. Anyone born today will have the star sign Taurus. Currently, people are enjoying their weekend.

The summer of 1994 has finally arrived. The weather has warmed up and the evenings are brighter than usual. In America, the song The Sign by Ace of Base is on top of the singles charts. Over in the UK, The Real Thing by Tony Di Bart is the number one hit song.

Bill Clinton is currently the President of the United States and the movie The Crow is at the top of the Box Office. In the United Kingdom, John Major is the current Prime Minister. Meanwhile, in technology news, a relatively new storage format called the CD is beginning to outpace the regular cassette tape in music sales. The disc-based format gives listeners the ability to skip between songs instead of having to manually rewind and forward.

Meanwhile, the Channel Tunnel between the United Kingdom and France has been officially opened to the public. The opening follows six years of construction that began in 1988. In South Africa, anti-apartheid revolutionary Nelson Mandela has been inaugurated as South Africa's first black president. In Italy, Silvio Berlusconi has become the new Prime Minister. This follows the success of Forza Italia in the parliamentary elections back in March.

Notorious serial killer John Wayne Gacy has recently been executed by lethal injection in Crest Hill, Illinois. Gacy had been on death row for 14 years. In the United Kingdom, people are currently shocked by the recent death of Labour Party leader John Smith. Smith suddenly died of a heart attack at the age of 55. A new romantic comedy film called "Four Weddings and a Funeral" has just been released in movie theaters.

In soccer, Manchester United have won the FA Cup Final after defeating Chelsea 4-0. If you were to travel back to this day, notable figures such as Nicole Brown Simpson, Andrés Escobar, Raul Julia and Eazy E would all be still alive. On TV, people are watching popular shows such as "Matlock", "One Foot in the Grave", "Star Trek: Deep Space Nine" and "Ellen".

Meanwhile, gamers are playing titles such as "Tiny Toon Adventures 2: Trouble in Wackyland", "Mario's Time Machine", "Doom" and "Super Metroid". Kids and teenagers are watching TV shows such as "Thomas the Tank Engine", "Married... with Children", "Dink, the Little Dinosaur" and "The Adventures of Pete & Pete". If you're a kid or a teenager, then you're probably playing with toys such as Sylvanian Families, Micro Machines, Yo-yo and Nerf Blaster.

Notable events that occurred around May 14th, 1994.

If you are looking for some childhood nostalgia, then check out May 14th, 2000 instead.

Internet personality.
Born on May 14th, 1996
She was born exactly 2 years after this date.

Historical weather information for May 14th, 1994.

Bill Clinton was the President of the United States on May 14th, 1994.

John Major was the Prime Minister of the United Kingdom on May 14th, 1994.