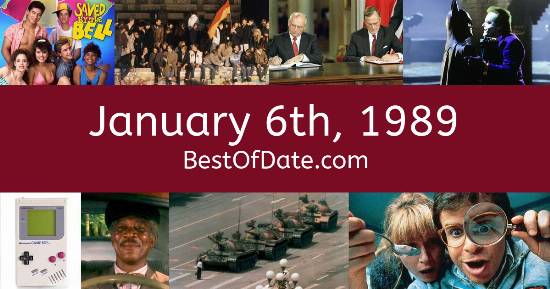 Songs that were on top of the music singles charts in the USA and the United Kingdom on January 6th, 1989.

The date is January 6th, 1989 and it's a Friday. Anyone born today will have the star sign Capricorn. Currently, people have "that Friday feeling" and are looking forward to the weekend.

People are starting to return back to work and school after the Christmas holidays. In America, the song Every Rose Has Its Thorn by Poison is on top of the singles charts. Over in the UK, Especially For You by Kylie Minogue & Jason Donovan is the number one hit song.

It's 1989, so the airwaves are being dominated by music artists such as Madonna, The Bangles, Phil Collins, Roxette, Milli Vanilli and The B-52s. If you were to travel back to this day, notable figures such as Sugar Ray Robinson, Ruhollah Khomeini, Mel Blanc and Rebecca Schaeffer would all be still alive. On TV, people are watching popular shows such as "Who's the Boss?", "The Golden Girls", "Matlock" and "21 Jump Street".

Meanwhile, gamers are playing titles such as "Maniac Mansion ", "Altered Beast", "Gain Ground" and "RoboCop". Children and teenagers are currently watching television shows such as "Alvin and the Chipmunks", "ThunderCats", "Pingu" and "The World of David the Gnome". If you're a kid or a teenager, then you're probably playing with toys such as My Little Pony (figures), Turnin' Turbo Dashboard, Mr Frosty and Jenga.

If you are looking for some childhood nostalgia, then check out January 6th, 1995 instead.

Ronald Reagan was the President of the United States on January 6th, 1989.

Margaret Thatcher was the Prime Minister of the United Kingdom on January 6th, 1989.

Enter your date of birth below to find out how old you were on January 6th, 1989.

Here are some fun statistics about January 6th, 1989.