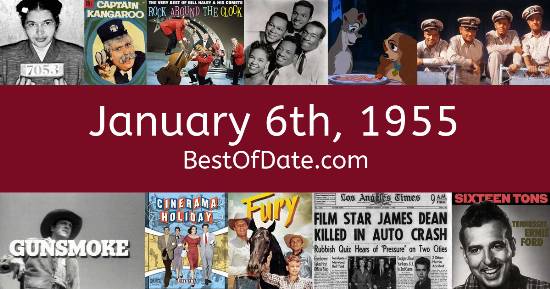 The best-selling single on January 6th, 1955 was "Mr. Sandman" by The Chordettes.

The date is January 6th, 1955, and it's a Thursday. Anyone born today will have the star sign Capricorn. People are starting to return back to work and school after the Christmas holidays.

In music, the song "Mr. Sandman" by The Chordettes is the best-selling record at the moment. Dwight David Eisenhower is currently the President of the United States, and Winston Churchill is the Prime Minister of the United Kingdom. It's 1955, so radio stations and jukeboxes are playing songs from artists such as Perez Prado, Bill Haley & His Comets, Mitch Miller, Roger Williams, Les Baxter, Bill Hayes, The Four Aces, The McGuire Sisters and Pat Boone.

On TV, people are watching popular shows such as "The Ed Sullivan Show", "I Love Lucy", "The Roy Rogers Show" and "The Danny Thomas Show". Kids and teenagers are watching TV shows such as "Looney Tunes", "Tom and Jerry", "Winky Dink and You" and "Lassie". If you're a kid or a teenager, then you're probably playing with toys such as Tonka trucks, Toy Guns, Spinning Tops and Feed the Elephant.

These are trending news stories and fads that were prevalent at this time. These are topics that would have been in the media on January 6th, 1955.

Check out our personality summary for people who were born on January 6th, 1955.

Television shows that people were watching in January, 1955.

If you are looking for some childhood nostalgia, then you should check out January 6th, 1961 instead.

Actress. Deceased
Born on January 6th, 1964
She was born exactly 9 years after this date.

American financier.
Born on January 6th, 1964
He was born exactly 9 years after this date.

American businessman.
Born on January 6th, 1984
He was born exactly 29 years after this date.

Soccer player.
Born on January 6th, 1989
He was born exactly 34 years after this date.

Dwight David Eisenhower was the President of the United States on January 6th, 1955.

Winston Churchill was the Prime Minister of the United Kingdom on January 6th, 1955.

Enter your date of birth below to find out how old you were on January 6th, 1955.
This information is not transmitted to our server.

Here are some fun statistics about January 6th, 1955.