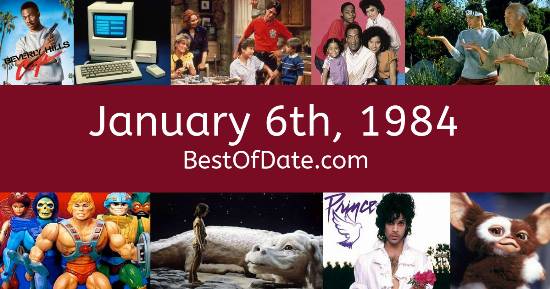 These songs were on top of the music charts in the United States and the United Kingdom on January 6th, 1984.

The movie "Terms of Endearment" was at the top of the Box Office on January 6th, 1984.

The date is January 6th, 1984, and it's a Friday. Anyone born today will have the star sign Capricorn. Currently, people have "that Friday feeling" and are looking forward to the weekend.

People are starting to return back to work and school after the Christmas holidays. In America, the song Say Say Say by Paul McCartney & Michael Jackson is on top of the singles charts. Over in the UK, Only You by Flying Pickets is the number one hit song.

Ronald Reagan is currently the President of the United States, and the movie Terms of Endearment is at the top of the Box Office. In the United Kingdom, Margaret Thatcher is the current Prime Minister. In fashion, women are currently wearing long sweaters, fishnet stockings, fingerless gloves, jumpsuits, over-sized scarves, miniskirts, stirrup pants and spandex cycling shorts. Meanwhile, men are wearing Hawaiian shirts, flannel, shell suits and wool sport coats.

Because it's 1984, the radio stations are being dominated by artists such as George Michael, Stevie Wonder, Wham!, Cyndi Lauper and Frankie Goes to Hollywood. If you were to travel back to this day, notable figures such as Marvin Gaye, Truman Capote, Kiki Camarena and David Huffman would all be still alive. On TV, people are watching popular shows such as "The Jeffersons", "The Facts of Life", "Only Fools and Horses" and "Family Ties".

Meanwhile, gamers are playing titles such as "Lunar Lander", "Asteroids", "Galaxian" and "Mario Bros.". Children and teenagers are currently watching television shows such as "Captain Kangaroo", "The Bugs Bunny Show", "Schoolhouse Rock!" and "Dungeons & Dragons". If you're a kid or a teenager, then you're probably playing with toys such as Lite-Brite, Water Ring Toss, Cabbage Patch Kids and Snoopy Sno-Cone Machine.

These are trending news stories and fads that were prevalent at this time. These are topics that would have been in the media on January 6th, 1984.

Check out our personality summary for people who were born on January 6th, 1984.

If you are looking for some childhood nostalgia, then you should check out January 6th, 1990 instead.

Model.
Born on January 6th, 1986
She was born exactly 2 years after this date.

Soccer player.
Born on January 6th, 1989
He was born exactly 5 years after this date.

Ronald Reagan was the President of the United States on January 6th, 1984.

Margaret Thatcher was the Prime Minister of the United Kingdom on January 6th, 1984.

Enter your date of birth below to find out how old you were on January 6th, 1984.
This information is not transmitted to our server.

Here are some fun statistics about January 6th, 1984.