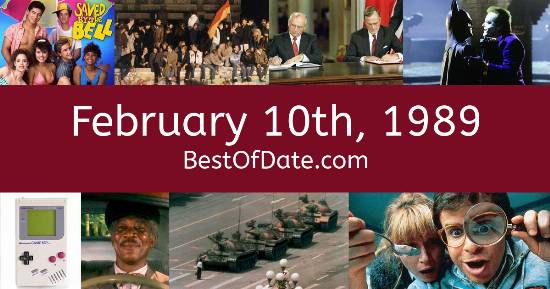 Songs that were on top of the music singles charts in the USA and the United Kingdom on February 10th, 1989:

The date is February 10th, 1989 and it's a Friday. Anyone born today will have the star sign Aquarius. Currently, people have "that Friday feeling" and are looking forward to the weekend.

Valentine's Day is just around the corner. In America, the song Straight Up by Paula Abdul is on top of the singles charts. Over in the UK, Something's Gotten Hold Of My Heart by Marc Almond & Gene Pitney is the number one hit song.

It's 1989, so the airwaves are being dominated by music artists such as Madonna, The Bangles, Phil Collins, Roxette, Milli Vanilli and The B-52s. On TV, people are watching popular shows such as "Knots Landing", "Magnum, P.I.", "Star Trek: The Next Generation" and "Roseanne". Meanwhile, gamers are playing titles such as "Maniac Mansion ", "Altered Beast", "Gain Ground" and "Mega Man 2".

Kids and teenagers are watching TV shows such as "Thomas the Tank Engine", "The Real Ghostbusters", "Married... with Children" and "Roseanne". Popular toys include the likes of "Water Ring Toss", "Transformers", "Micro Machines" and "Jenga".

Who was the Prime Minister of the United Kingdom on February 10th, 1989?

Enter your date of birth below to find out how old you were on February 10th, 1989.

Looking for some nostalgia? Here are some Youtube videos relating to February 10th, 1989. Please note that videos are automatically selected by Youtube and that results may vary! Click on the "Load Next Video" button to view the next video in the search playlist. In many cases, you'll find episodes of old TV shows, documentaries, music videos and soap dramas.

Here are some fun statistics about February 10th, 1989.