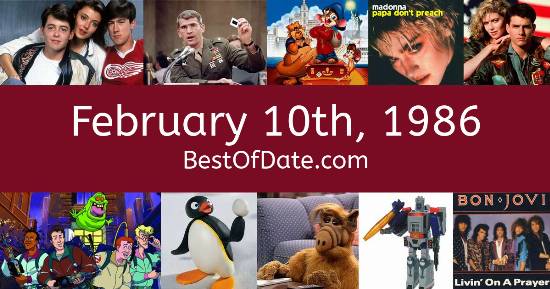 Songs that were on top of the music singles charts in the USA and the United Kingdom on February 10th, 1986.

The date is February 10th, 1986 and it's a Monday. Anyone born today will have the star sign Aquarius. Valentine's Day is just around the corner.

If you were to travel back to this day, notable figures such as Len Bias, Cliff Burton, Gia Carangi and Liberace would all be still alive. On TV, people are watching popular shows such as "Knight Rider", "Night Court", "Who's the Boss?" and "The Equalizer". Meanwhile, gamers are playing titles such as "Space Invaders", "Asteroids", "Tetris" and "Gauntlet".

Children and teenagers are currently watching television shows such as "Cockleshell Bay", "Inspector Gadget", "Alvin and the Chipmunks" and "The Care Bears". Popular toys at the moment include the likes of Operation, Lite-Brite, Pogo ball / Lolo ball and Garbage Pail Kids (trading cards).

If you are looking for some childhood nostalgia, then check out February 10th, 1992 instead.

Ronald Reagan was the President of the United States on February 10th, 1986.

Margaret Thatcher was the Prime Minister of the United Kingdom on February 10th, 1986.

Enter your date of birth below to find out how old you were on February 10th, 1986.

Here are some fun statistics about February 10th, 1986.