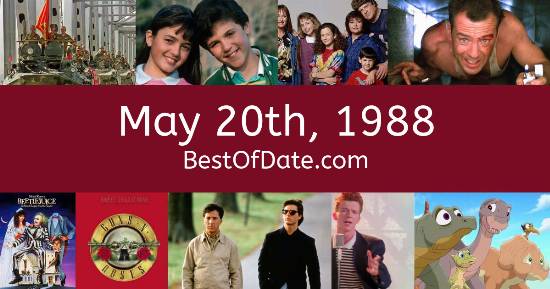 Songs that were on top of the music singles charts in the USA and the United Kingdom on May 20th, 1988.

The date is May 20th, 1988 and it's a Friday. Anyone born today will have the star sign Taurus. Currently, people have "that Friday feeling" and are looking forward to the weekend.

The summer of 1988 has finally arrived. The weather has warmed up and the evenings are brighter than usual. In America, the song Anything For You by Gloria Estefan & Miami Sound Machine is on top of the singles charts. Over in the UK, Perfect by Fairgound Attraction is the number one hit song.

It's 1988, so the airwaves are being dominated by music artists such as Phil Collins, Bobby McFerrin, the Pet Shop Boys, Belinda Carlisle and Rick Astley. On TV, people are watching popular shows such as "'Allo 'Allo!", "The Cosby Show", "Miami Vice" and "21 Jump Street". Meanwhile, gamers are playing titles such as "Missile Command", "Street Fighter", "Maniac Mansion " and "Final Fantasy".

Children and teenagers are currently watching television shows such as "The Bugs Bunny Show", "Heathcliff", "Jem and the Holograms" and "The Flintstone Kids". Popular toys at the moment include the likes of Fisher-Price Little People (Farm), Transformers, Pogo ball / Lolo ball and Sylvanian Families.

Notable events that occurred around May 20th, 1988.

Historical weather information for May 20th, 1988.

Ronald Reagan was the President of the United States on May 20th, 1988.

Margaret Thatcher was the Prime Minister of the United Kingdom on May 20th, 1988.

Leave a comment and tell everyone why May 20th, 1988 is important to you.