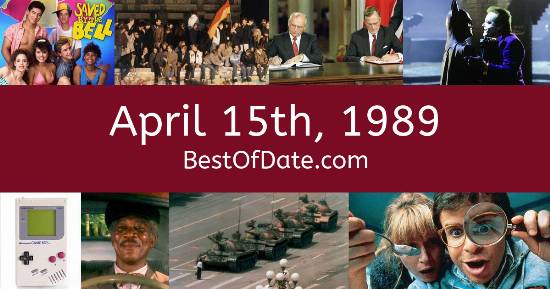 Songs that were on top of the music singles charts in the USA and the United Kingdom on April 15th, 1989.

The date is April 15th, 1989 and it's a Saturday. Anyone born today will have the star sign Aries. Currently, people are enjoying their weekend.

The summer of 1989 is drawing closer and temperatures have started to rise. In America, the song She Drives Me Crazy by Fine Young Cannibals is on top of the singles charts. Over in the UK, Eternal Flame by The Bangles is the number one hit song.

Popular toys at the moment include the likes of Water Ring Toss, Cabbage Patch Kids, Big wheel (tricycle) and Jenga.

Celebrities, historical figures and notable people who were born on the 15th of April.

Margaret Thatcher was the Prime Minister of the United Kingdom on April 15th, 1989.

Enter your date of birth below to find out how old you were on April 15th, 1989.