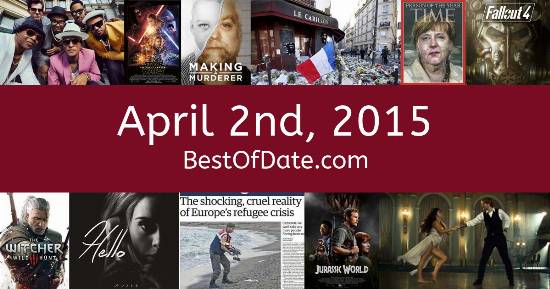 Songs that were on top of the music singles charts in the USA and the United Kingdom on April 2nd, 2015:

The date is April 2nd, 2015 and it's a Thursday. Anyone born today will have the star sign Aries. The summer of 2015 is drawing closer and temperatures have started to rise.

In America, the song Uptown Funk by Mark Ronson featuring Bruno Mars is on top of the singles charts. Over in the UK, Lay Me Down by Sam Smith featuring John Legend is the number one hit song. Barack Obama is currently the President of the United States and the movie Home is at the top of the Box Office.

150 people have tragically lost their lives after Germanwings Flight 9525 recently crashed into the French Alps. News reports suggest that one of the co-pilots was suicidal and that he deliberately caused the crash. In wrestling, Seth Rollins has just defeated Roman Reigns and Brock Lesnar in a triple threat match at Wrestlemania 31. Australia have just won the 2015 Cricket World Cup.

The world is currently reacting to news that an Al-Qaeda offshoot has stormed Garissa University College in Kenya and murdered 148 people. On TV, people are watching popular shows such as "Bones", "Rick and Morty", "Jane the Virgin" and "Better Call Saul". Meanwhile, gamers are playing titles such as "Call of Duty: Advanced Warfare", "Assassin's Creed: Unity", "Far Cry 4" and "Dying Light".

Kids and teenagers are watching TV shows such as "Jake and the Never Land Pirates", "Lab Rats: Bionic Island", "Paw Patrol" and "Sheriff Callie's Wild West". Popular toys include the likes of "PlayStation 4" and "Xbox One".

Who was the Prime Minister of the United Kingdom on April 2nd, 2015?

Enter your date of birth below to find out how old you were on April 2nd, 2015.

Looking for some nostalgia? Here are some Youtube videos relating to April 2nd, 2015. Please note that videos are automatically selected by Youtube and that results may vary! Click on the "Load Next Video" button to view the next video in the search playlist. In many cases, you'll find episodes of old TV shows, documentaries, music videos and soap dramas.

Here are some fun statistics about April 2nd, 2015.