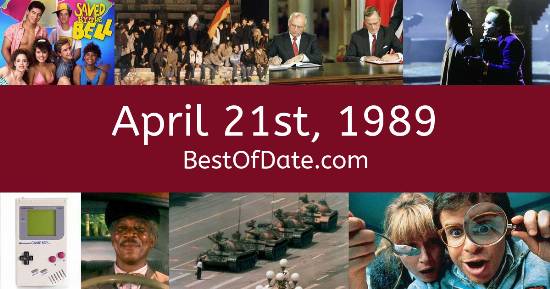 Songs that were on top of the music singles charts in the USA and the United Kingdom on April 21st, 1989.

The date is April 21st, 1989 and it's a Friday. Anyone born today will have the star sign Taurus. Currently, people have "that Friday feeling" and are looking forward to the weekend.

The summer of 1989 is drawing closer and temperatures have started to rise. In America, the song Like A Prayer by Madonna is on top of the singles charts. Over in the UK, Eternal Flame by The Bangles is the number one hit song.

On TV, people are watching popular shows such as "Magnum, P.I.", "Matlock", "Married... with Children" and "Teenage Mutant Ninja Turtles". Meanwhile, gamers are playing titles such as "Ultima IV: Quest of the Avatar", "Altered Beast", "Mega Man 2" and "Super Mario Land". Kids and teenagers are watching TV shows such as "Danger Mouse", "Thomas the Tank Engine", "ALF" and "Babar".

Popular toys at the moment include the likes of the Easy-Bake Oven, Water Ring Toss, Sylvanian Families and Micro Machines.

If you are looking for some childhood nostalgia, then check out April 21st, 1995 instead.

Celebrities, historical figures and notable people who were born on the 21st of April.

Margaret Thatcher was the Prime Minister of the United Kingdom on April 21st, 1989.

Enter your date of birth below to find out how old you were on April 21st, 1989.