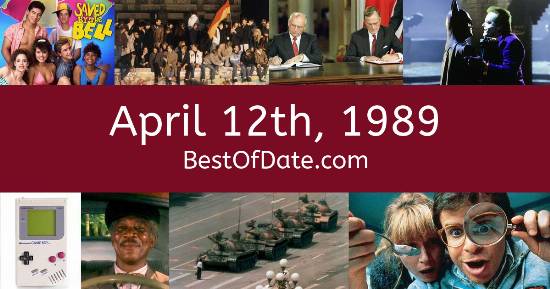 Songs that were on top of the music singles charts in the USA and the United Kingdom on April 12th, 1989.

The date is April 12th, 1989 and it's a Wednesday. Anyone born today will have the star sign Aries. The summer of 1989 is drawing closer and temperatures have started to rise.

In America, the song She Drives Me Crazy by Fine Young Cannibals is on top of the singles charts. Over in the UK, Eternal Flame by The Bangles is the number one hit song. George W. Bush Snr. is currently the President of the United States and the movie Rain Man is at the top of the Box Office.

If you were to travel back to this day, notable figures such as Sugar Ray Robinson, Ruhollah Khomeini, Mel Blanc and Rebecca Schaeffer would all be still alive. On TV, people are watching popular shows such as "Magnum, P.I.", "Charles in Charge", "The Golden Girls" and "The Wonder Years". Meanwhile, gamers are playing titles such as "Missile Command", "Duck Hunt", "Ultima IV: Quest of the Avatar" and "Mega Man 2".

Children and teenagers are currently watching television shows such as "The Smurfs", "The Real Ghostbusters", "Teenage Mutant Ninja Turtles" and "The Wonder Years". If you're a kid or a teenager, then you're probably playing with toys such as Turnin' Turbo Dashboard, Pogo ball / Lolo ball, Laser Tag and Popples.

If you are looking for some childhood nostalgia, then check out April 12th, 1995 instead.

Soccer player.
Born on April 12th, 1994
He was born exactly 5 years after this date.

Gun control activist.
Born on April 12th, 2000
He was born exactly 11 years after this date.

Margaret Thatcher was the Prime Minister of the United Kingdom on April 12th, 1989.

Enter your date of birth below to find out how old you were on April 12th, 1989.